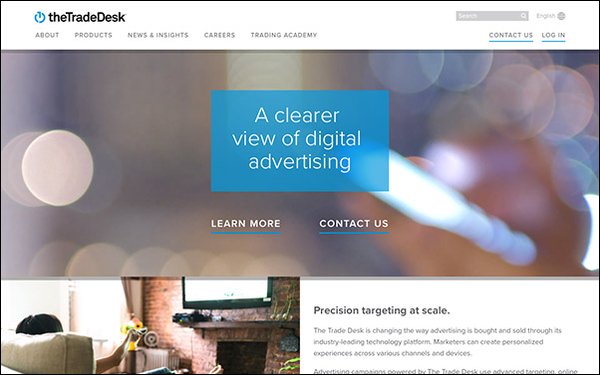 Marketers seem to want an algorithm-fueled, programmatic ad-buying platform, and it shows in The Trade Desk’s earnings released Thursday.

“Its business appears to be as well-positioned as ever to capitalize on the expansion of programmatic ad buying/selling to more and more media formats globally,” wrote Tom White, analyst at D.A. Davidson, in a research note published Friday. He wrote that the “upside was slightly less than in the past couple of quarter, but growth remains “very impressive.”

Magna Global, the data arm of IPG Mediabrands company, estimates that in 2018 programmatic ad buying will grow 21%. The Trade Desk is growing more than two times that amount, Jeff Green, The Trade Desk founder and CEO, said during the earnings call.

“Of the top 200 brands that have signed with us since 2017, spend has increased by over 5 times year-to-date compared with last year,” Green said.

He also said the company’s independence helps it avoid conflicts of interest by not owning any media and serving only the demand side.

And while The Trade Desk continues to show growth, not all analysts agree with the company’s stock valuation.

Brian Wieser, analyst at Pivotal Research Group, wrote in a research note that even with the continued upside, “too much has to go right for the company to justify its current valuation.

“Although The Trade Desk is off to an early lead in its presence buying programmatic inventory on Connected TVs, the space will feature a different set of competitors who are as well or in some places better established,” Wieser wrote.

The Trade Desk executives estimate the company will close out 2018 with revenue of $464 million, up from the $456 million goal it in the second quarter of 2018.