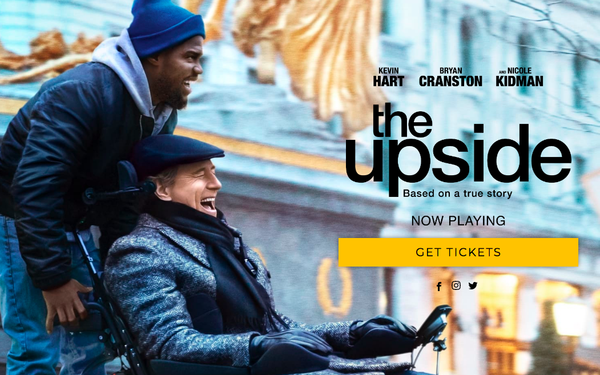 Making good on its promise to move beyond legacy TV ratings guarantees, NBCUniversal made its first "business-outcome" TV advertising guarantee — based on movie ticket sales — for the current STXfilms' “The Upside.”

The guarantee was based on U.S. box-office results, where the movie, starring Nicole Kidman, Bryan Cranston and Kevin Hart, earned $20.4 million in its opening weekend, and $76.1 million to date.

The movie premiered on January 11.

NBCU, STXfilms and Horizon Media will make a similar deal for the upcoming animated feature film “UglyDolls,” which premieres on May 3, per NBCU.

TV networks have been looking to move away from traditional age/gender viewership guarantees to more business outcome promises for advertisers -- which can be linked to actual sales, visits to a company’s website, in-store traffic or other metrics.

For the upfront market in 2018, NBCUniversal started CFlight, which makes viewing guarantees for advertising over an entire flight of a brand’s campaign —- beyond C3/C7 rating promises. Nielsen C3/C7 metrics are the average minute commercial rating plus three or seven days of time-shifting viewing.

Last year, for the upfront market, A+E Networks said it was starting a regular effort for limited guarantee deals for advertisers based on business outcomes.

For some years now, many TV networks have offered "secondary guarantees" on data other than TV-based measures.