GroupM Predicts Streaming Will Have 'Gradual' Impact On TV Advertisers 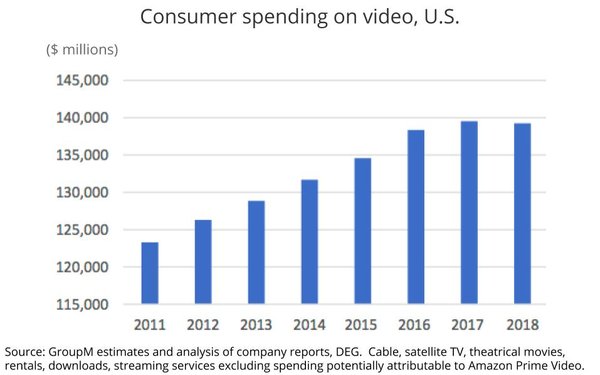 The $140 billion-plus video programming marketplace, including TV, will increasingly adopt hybrid business models, but the impact on ad-supported options will remain gradual, according to a new market assessment published by GroupM this morning.

The GroupM “POV” on streaming services, the first to be published by former Wall Street analyst since joining GroupM as global president of business intelligence, is consistent with Wieser’s long-held position that TV and/or the expanded ad-supported video marketplace, will remain Madison Avenue’s apex medium.

“It is possible that hit programming on the new platforms will cause consumers to massively shift viewing away from traditional TV at a faster pace than we’ve seen to this point, but it seems unlikely,” Wieser opines, adding, “The gap in quality would need to expand massively. More likely, if the new entities allocate capital to programming (originals and library content) in an approach similar to Netflix, we’re likely to see another mid-to-high single digit share of viewing shift from traditional TV.”

Conversely, Wieser makes the case that there are endemic factors tethering consumers to “legacy video” distribution, especially the fact that most top-tier live sports are “likely to remain on traditional TV, tying most consumers to their existing services in some form.”

Wieser also predicts that price competition in the form of “discounted broadband offerings from incumbent MVPDs” will keep many households from completely “cutting the cord.”

Wieser also predicts conventional TV programmers will continue to “offer less clutter and more of an opportunity to break through” and enhanced targeting opportunities will help preserve TV’s dominance in the ad mix.

“Just as they’ve adapted to a world with significant time-shifting, advertisers will have time to adapt to the streaming era,” Wieser concludes, adding: “They will also see many of its benefits as well.”