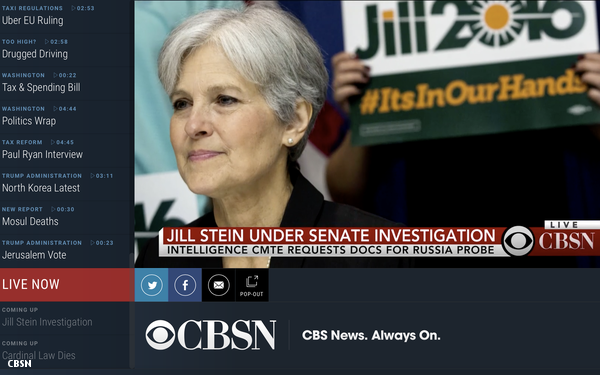 When people talk about the streaming wars, there is a tendency to focus on giants like Netflix, Hulu, and YouTube. However, an entire niche has quietly grown to become one of the most significant forces in streaming: live news.

Once limited to traditional broadcast news windows, or cable news channels, news has finally broken through on streaming platforms, with a number of legacy players and startups aiming for eyeballs.

Today is the first anniversary of ABC News Live, that company’s streaming news offering. The offering, which focuses primarily on live breaking news coverage, is planning to add programming over the coming months, the company says. Among the projects in development are a video version of the FiveThirtyEight politics podcast and an hourly headlines program. The service hired its first dedicated news anchor, Kimberly Brooks, in March of this year.

Meanwhile, NBC News is planning to launch its streaming service, NBC News Now. Not much is known about the service just yet, although NBC has been testing a number of streaming concepts over the past few months, with live event coverage and hosted shows featuring MSNBC and NBC News talent.

Of course, CBSN, which launched in 2014, has set the bar for live streaming news to this point. The service now counts more than one million daily video streams, is profitable, and is in the process of expanding to local regions, starting with CBSN New York and CBSN Los Angeles.

These three efforts showcase how broadcast TV, long viewed as having been slow to adapt to a streaming world, is changing with the times. CBS executives have long pointed out that CBSN’s viewers tend to be about 20 years younger than its broadcast viewers, and ABC and NBC are targeting that same younger audience.

Of course, there are also upstarts that have made headway in the space.

The biggest independent player is Cheddar, the streaming news network that announced a deal to be sold to Altice last month. Cheddar started as a business network (a CNBC for millennials, if you will), but quickly expanded to include more general news coverage, interviews, features, and now entertainment programming.

Cheddar won over advertisers by promising a much younger audience than traditional TV news, and integration into sponsored segments. It now offers programmatic buys as well.

For all the talk of Netflix and Hulu, much of the focus on streaming has been on entertainment programming, or sports in vMVPD bundles.

News, however, is a key genre that was often left out of that conversation. With many younger consumers simply not watching TV the same way their parents did, these services are hoping to pick up the slack, and bring viewers into the TV news ecosystem through the streaming platforms of their choosing.

The next year is poised to be a pivotal one for streaming news services, with CBSN expanding, ABC News Live adding new programming, and NBC News Now launching, with Cheddar set to take advantage of the corporate support of Altice.

The question is, will these new streaming offerings cut in to the viewership of TV-first players, or purely supplement them? It is a question being eagerly followed by media executives, and the marketers looking to reach the news-viewing audience.