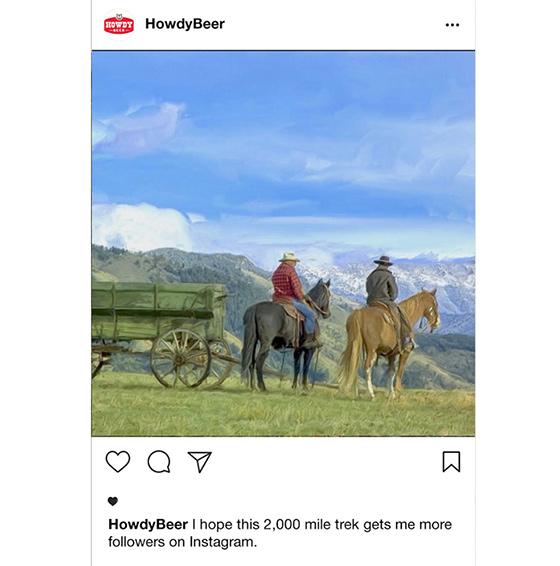 The campaign is for Howdy Beer, which it describes as “a quality sessionable beer.” It is less expensive than most craft beers (about $10 per six-pack) and aims to be better-tasting than mass-produced beer. Post calls Howdy, which has 4.5% ABV.

The campaign targets a regional demographic the agency calls “New West” -- typically self-reliant, millennial professionals. They are not exactly “cowboys,” but definitely not cosmopolitan.

The goal is to suggest a re-evaluation of the need for an artisanal beer, and to promote Howdy trial, according to the agency.

Four Instagram ads illustrate social era texts with Old West art (“I will literally die tonight if I don’t get dinner,” under an old-time photo of a blizzard-bound cowherd). Ten Google search ads offer plain responses to too-hip queries (“Cashmere boxer shorts” returns “Did you mean tightey whiteys? Of course you did”).

Six print and poster ads offer their stripped-down take on today (“In the West we have a name for strong, independent women. They’re called women.”) And at Post Brewing’s four brew pubs, tongue-in-cheek charity collection boxes will offer a free pint of Howdy to those who put their “expensive designer jeans” to a better use.

“Coors owns ‘Colorado,’” says Jonathan Schoenberg, executive creative director at TDA_Boulder. “This was an opportunity to own the ‘New West.’”

“They decided to put all of their efforts into one brew,” Schoenberg tells Marketing Daily. “It fills the gap between a mass-produced beer and a craft beer. In price and taste. And... it has a point of view.”

“Sessionable” is interchangeable with “lawn-mower beer,” he says.

“It’s a lighter, more drinkable beer,” Schoenberg says. “Remember ‘Schaefer, the one beer to have when you’re having more than one’? You can drink a lot of these beers.”