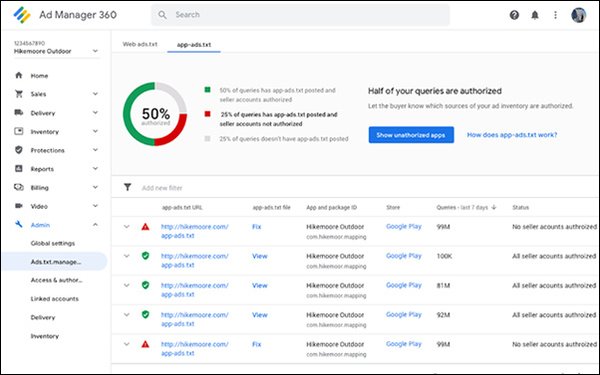 Google on Tuesday announced its intent to block ad serving of unauthorized app inventory in AdMob and Ad Manager when identified by a publisher’s app-ads.txt file. The change goes into effect August 27.

The goal is to help app publishers prevent their inventory from being spoofed by bad actors while ensuring that the ads reach the intended audience.

Google “strongly” encourages publishers to create an app-ads.txt file and publish it to the developer domain in App Store and/or Google Play Store listings.

Publishers that do not implement an app-ads.txt file will not see changes to their ad serving, but they won’t benefit from the added protection to guard against spoofing.

The App-ads.txt standard, released by the IAB Tech Lab, aims to help prevent unauthorized or domain-spoofed app inventory from being transacted across mobile, connected TV, and other devices.

It defines a method for app publishers to publicly declare the authorized companies that can sell or resell their digital advertising inventory.

App-ads.txt, an extension of the original ads.txt standard first published by the IAB in 2017, has become “one of the most successful industry standards and is now widely adopted by web publishers,” according to a Google blog post co-authored by Alex Jacobson, product manager of ad traffic quality and Florie Arlegui, product manager of ad verification and policy.

The post warned that “implementation errors could cause interruptions to ad serving, so it is very important for you to verify that the app-ads.txt file you publish on your developer domain contains all your valid property codes” before the deadline.

Google also will roll out verifications and warnings in the user interface for AdMob and Ad Manager when errors are detected to help verify the correct file implementation.

The warnings will appear if Google detects that the publisher ID is missing from the app-ads.txt file.