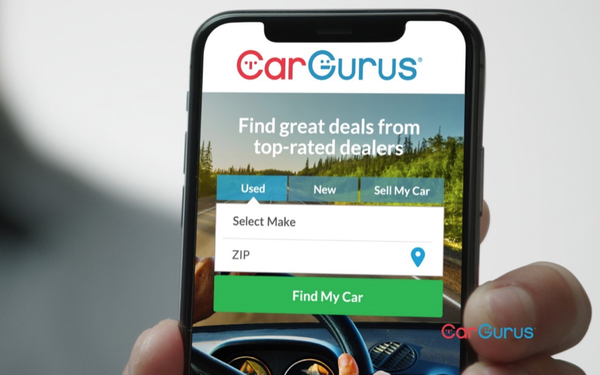 CarGurus is launching a branding campaign inspired by user testimonials about how the vehicle-shopping website helped them find a great deal on a vehicle.

“MyCar, My Deal” shows the benefits and advantages of shopping on the global online automotive marketplace, such as intuitive search and filtering, deal ratings that call out when cars are overpriced, and free access to hard-to-find vehicle information like number of previous owners, accident history and how long a car has been on a dealer’s lot.

This strong user experience is why CarGurus has become a trusted car shopping source, says Sarah Welch, CMO at CarGurus.

“Our primary target is definitely active car shoppers,” Welch tells Marketing Daily. “It is overwhelming, time-consuming and confidence draining for them to [figure out] what to pay for a car and whom to trust with this major purchase. CarGurus is uniquely positioned to help them find a great deal from a reputable dealer.”

The campaign, created by Plum14, includes three 30-second spots: “Shopping with confidence,” “Steve wants a car,” and “The less painful way.” Each will air on broadcast and cable television networks through the end of the year, as well as digital marketing channels like YouTube. Spots were directed by Tim Abshire. Taylor James Studio handled development and production and Ocean Media handled media planning.

“CarGurus has evolved and grown our commitment to television as part of our media mix since launching our initial campaign in 2017,” Welch says. “Since then, we have been able to measure the positive impact that television has had on our brand-building efforts and business results.”

The campaign is also an evolution of the company’s messaging strategy, she says.

“One difference in this campaign is that we are launching the entire campaign concurrently, as opposed to launching a spot in parallel with existing top-performing creative,” Welch says. “Our digital marketing brand roots have led us to A/B test our previous TV campaigns, but we’re interested to test the value of a consistent look, feel and message across all of our spots to see how that can amplify the cumulative effect of TV efforts in what is an increasingly crowded category.”