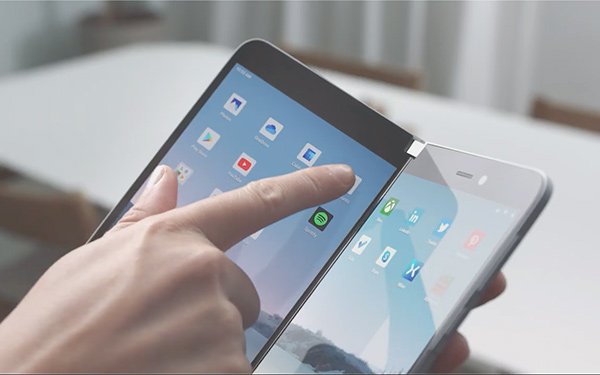 It looks like Microsoft's future in mobile advertising will rely on power from Android, a Google operating system. The company announced this week that it will reenter the smartphone market with an Android-powered smartphone it calls Surface Duo.

The device is scheduled for release in 2020.

The Surface Duo is a dual-screen foldable device. Think of it as a mini Surface that would enable brands to showcase more of each product, along with a detailed description. The screen is much larger than a typical smartphone screen. It’s estimated that Android powers more than 2.5 billion devices worldwide. Now it will power a mobile smartphone for Microsoft.

The Surface Duo has two 5.6-inch displays that swing 360 degrees to unfold into an 8.3-inch tablet, which expands the user’s range of viewable space.  It can fold together backward or frontward.

Yusuf Mehdi, corporate vice president for Microsoft's modern life, search and devices group, told Cnet the focus is on making people more productive, but the key for advertisers will be gaining more screen space -- not only for search advertising through Bing, but for rich media and online video. It appears that users will have the ability to run and see more than one app on the device simultaneously.

The move is not surprising. In April Microsoft announced it had developed Edge on the Google Chromium browser engine to replace Internet Explorer. Microsoft worked with Google to complete the project, not only to decrease the buggy code vulnerabilities, but to make it easier for Microsoft to innovate more quickly around new features, privacy and secure browsing.

Earlier this year, Steve Sirich, general manager at Microsoft, told Search Marketing Daily that building Edge on Google Chromium will work in Microsoft's favor. “We have a strong precedent and history in browsing, and on Chromium can build a very competitive product," he said.