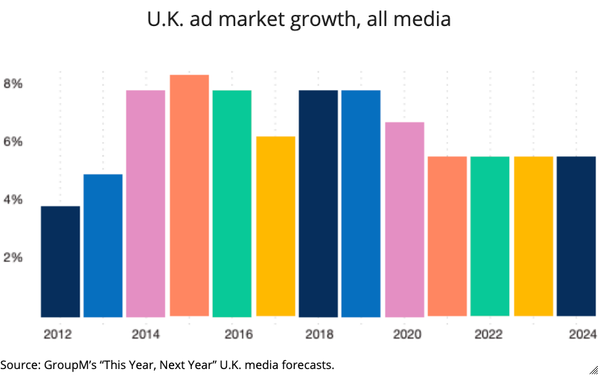 Despite the political and economic uncertainty facing the United Kingdom in 2019, the media industry has "held strong," according to GroupM Business Intelligence Global President Brian Wieser, summing up the agency holding company's just-released U.K. advertising forecast this morning.

"Our estimate that advertising will grow by +7.8% this year marks the sixth consecutive year of mid-to-high single-digit growth," Wieser continues, noting that "since 2013, the U.K.’s advertising sector has expanded by more than half, up +55% over that year’s levels, and, with that growth, the U.K. is unambiguously the fourth largest market on Earth."
Wieser goes on to predict that if recent growth trends continue in the U.K., it would supplant Japan as the third-largest ad market in the world within five years.