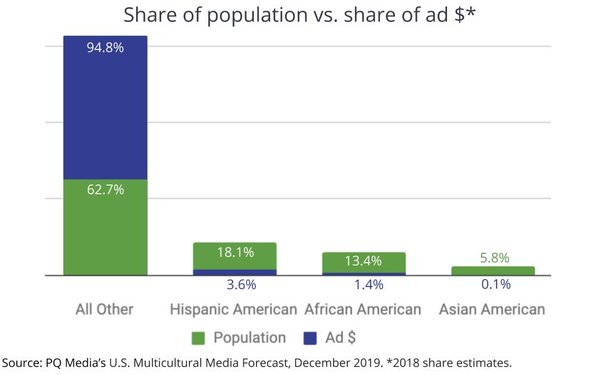 Advertising and marketing spending targeted at multicultural audiences in the U.S. will expand 6.3% in 2020, exceeding recent levels of growth, according to the latest edition of an annual forecast being released today by media industry economists PQ Media.

That growth, however, will be the same that PQ Media projects for the overall expansion of advertising and marketing spending in the U.S. next year, indicating zero growth in the share being allocated to media targeting multicultural audiences.

Moreover, the report also reveals that a significant disparity already exists between the relative shares multicultural segments represent in the U.S. population, vs. the share of ad spending being allocated to them (see chart above).

Hispanic Americans, which have the highest advertising-to-population representation (one-to-five), benefit more than other groups because of a relative abundance of Spanish-language media.

However, "all others" -- a segment mostly representing White Americans of European descent -- represent 94.8% of all ad-budget targeting, but only 62.7% of the population

The new report is based on research sponsored by the Association of National Advertisers (ANA) and the Alliance for Inclusive and Multicultural Marketing (AIMM).

"The primary objective of the U.S. Multicultural Media Forecast 2019 was to provide ANA and AIMM members with comprehensive strategic intelligence on the domestic multicultural media landscape segmented by key demographics, media platforms and media buying strategies," PQ Media notes in the report.
“The multicultural media market is fast becoming a critical consumer segment for brand marketers that want to accelerate growth and increase overall U.S. market share, as multiethnic consumers, including Hispanic, African and Asian Americans, constitute the fastest growing demographic in the country," notes PQ Media President & CEO Patrick Quinn, adding: "Nevertheless, multicultural media growth has slightly underperformed the broader U.S. media industry and it still accounts for a mere sliver of the American pie.
“To put this into context, consider that multicultural consumers comprise nearly 40% of the total U.S. population, yet multicultural media investments draw only 5.2% of overall U.S. media spending.” 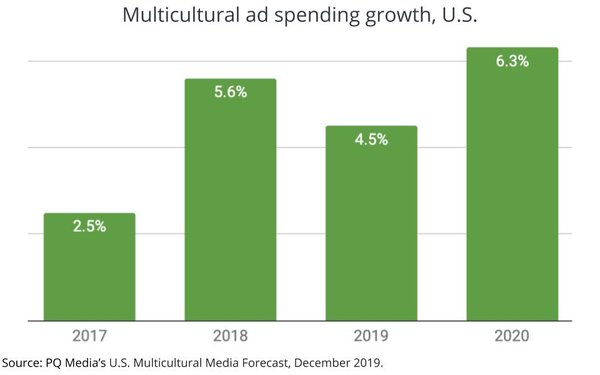