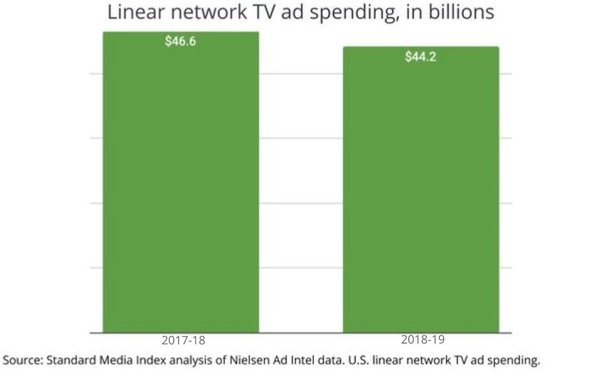 National TV advertising for linear TV networks continues to slip in the wake of growing media competition -- especially in prime time -- dropping 5% for the 2018-2019 TV season from the previous year.

Linear network TV advertising was down $44.2 billion from $46.6 billion, according to a Standard Media Index analysis of Nielsen Ad Intel data.

In addition, the TV networks’ upfront advertising market continues to see slight declines as marketers move dollars to other media and spending periods.

SMI says that for the first time, total entertainment/news programming fell below the 50% mark of total annual TV network advertising revenue to a 49% share -- totaling $21.5 billion.

The outlook for the two-year-period adjusts for the spike every other year due to high Olympic advertising years.

Although broadcast entertainment prime time remains its largest programming segment, it has seen a 3.4% drop to $7.2 billion in 2018-2019 over the two-year period.

In the fourth quarter of 2018, all entertainment programming on linear TV (broadcast and cable) commanded 58% of advertising dollars with 30% going to sports, 9% for news and 3% going to kids programming.

Including all linear TV advertising -- national and local -- SMI says, the business continues “to pace the ad industry with roughly $65 billion in annual ad spend.” Other specific digital media platforms are behind: Search advertising is at $58 billion and social media, $36 billion Other traditional media (newspapers, radio, out-of-home, and magazines) will total $34 billion.