The Buzz Surrounding Joe For President (No, Not That Joe) 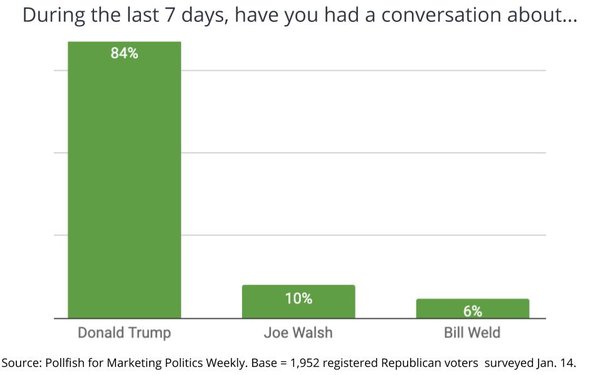 Earlier this week, as I was preparing for an interview with Republican presidential candidate Joe Walsh, I received some interesting data showing how the leading Democratic candidates were trending -- not in the polls, on social media, or in media spin, but in terms of word-of-mouth. You know, actual American voters talking about them.

The data was based on a survey of registered Democratic voters conducted by Engagement Labs and showed conversations about Bernie Sanders, Elizabeth Warren, Mike Bloomberg, Pete Buttigieg, Andrew Yang, and Amy Klobuchar were rising vs. a similar poll it conducted in December.

Since I was about to interview Walsh, I asked if they had conducted similar research about the word-of-mouth of the Republican candidates for President -- Walsh, Bill Weld, and the incumbent President -- and they said they had not. So I decided to field some myself, thanks to our consumer polling partner Pollfish.

Replicating the Engagement Labs method as closely as I could -- using the same sample base (1,952 respondents), but interviewing only registered Republican voters, we found two significant things:

One, which should be obvious to any political media observer, is how much of a dominant position the President enjoys in terms of organic buzz from word-of-mouth conversations about him vs. other candidates.

The second is that for a guy who announced his candidacy less than five months ago, Walsh isn't doing that bad. Especially when you consider he has spent almost no money on paid media, and lacks the significant campaign funding of his rivals in any party.

Specifically, Walsh is now generating organic conversations among 10% of the Republican base. While that pales in comparison to the incumbent President's 84%, it stacks him somewhere between Democrats Buttigieg at 17% and Yang and Tom Steyer's (10% each), according to Engagement Labs' most recent survey.

That's also impressive given the amount of paid and earned media those candidates have already generated over the past year, and shows that despite his lack of campaign funding, Walsh is an organic media phenomenon.

In terms of the rest of the field, our analysis reveals that the President enjoys a 50-point word-of-mouth advantage over his next-closest rival, Democratic frontrunner Joe Biden.

But it also raises the question of why the President doesn't generate weekly conversations among 100% of the Republican base, especially since he tweets incessantly about his "95%" approval rating in the party. 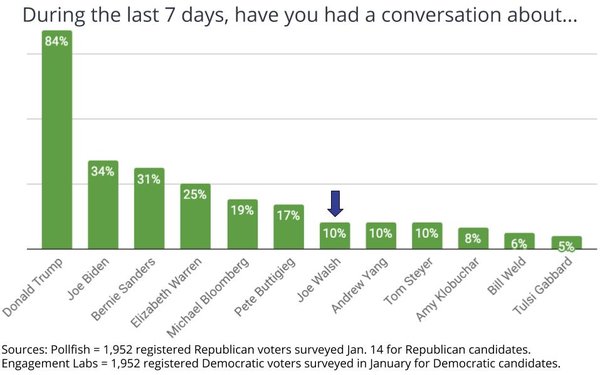 I don't know for sure, but I think it might have something to do with the sentiment and the fact that even some of his supporters just don't like talking about him.

The data also suggests that Walsh has tremendous upside in terms of conversational sentiment for both Walsh and his other GOP rival Bill Weld, both of whom enjoy conversations that are mostly neutral among Republican voters.

The findings suggest tremendous upside potential for the Republican rivals, despite the fact that the Republican party already has canceled 2020 presidential primaries in about 20 states.

Today, I will be asking Walsh how he plans to close that gap and what his path to a nomination actually is.

You can check it out via live stream here at 1:30 today, or check back for the archived video when you have time. 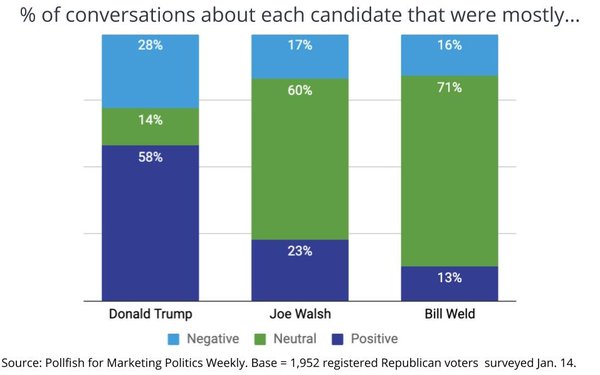 cmmr, communications, earned media, politics, research, word of mouth
2 comments about "The Buzz Surrounding Joe For President (No, Not That Joe)".
Check to receive email when comments are posted.
Read more comments >
Next story loading