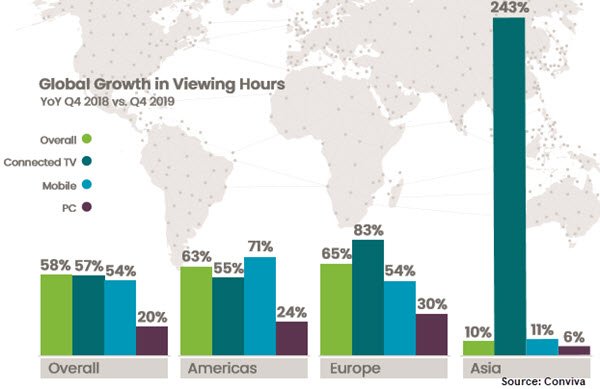 Streamed viewing hours rose by 63% in the Americas and 58% globally in 2019’s fourth quarter compared to the year-ago quarter, according to the latest “State of Streaming” report from Conviva.

Nearly a quarter of all streaming time — at 24% — is spent on a mobile device, and Google’s Android phones have a 60% share of mobile devices used (up 47% year-over-year).

Apple’s iPhone and iPad have 26% and 14% shares, respectively. That’s an 84% increase for the iPhone.

News organizations created 23% more videos on average across all social platforms in 2019.

Average views per video for news organizations leaped 125%, likely due to the impeachment of President Donald Trump, the upcoming U.S. Democratic primaries, and the U.K. Brexit scenario.

Overall, Facebook accounted for nearly 60% of all video views for major news organizations on social media in 2019.

Meanwhile, professional sports found a balance on social: down 9% in number of videos posted in fourth-quarter 2019 versus the year-ago quarter, but capturing a cross-platform increase of 33% in average views per video and 40% in average engagements per video.

Sports organizations saw the largest increase of average engagements per video in the quarter, growing 50% on Instagram and 47% on YouTube.

Instagram drove the most views for pro teams during 2019, driving 46% of their total views.

However, as usual, there was mixed news on the advertising experience front.

Globally, the average length of time a viewer had to wait for an ad to start was 2.27 seconds in the fourth quarter — nearly double the 1.14 average seconds in third-quarter 2019, the video analytics and optimization firm reports.

As a result, the numbers of viewers exiting before ads begin surged by 49% between the two quarters.

In somewhat positive news, streaming ad attempts that failed to play as intended decreased from 39.6% in the third quarter to 36.5% in the fourth quarter.

Ad start failures also improved, from 35.7% in the third quarter to 30.8% in the fourth quarter.

Roku, which maintained a 43% of all connected TV viewing time in the fourth quarter, markedly improved its viewer experience during 2019, according to the report.

Fire TV — the second-largest player in the device category, with 18% of the CTV market — reduced video start failures by 15% and buffering by 9% in the fourth quarter versus the third quarter. However, Fire’s video start times rose 15% as compared with fourth-quarter 2018.

Apple TV, which has 9% of the CTV market, still leads with the fastest start time, but saw increases in both video start times and video start failures, up by 25% and 19% respectively.

“The companies that win the streaming wars will be those able to offer viewers a fast, clear, reliable experience regardless of where in the world they live, or what device they use,” underscored Conviva CEO Bill Demas.