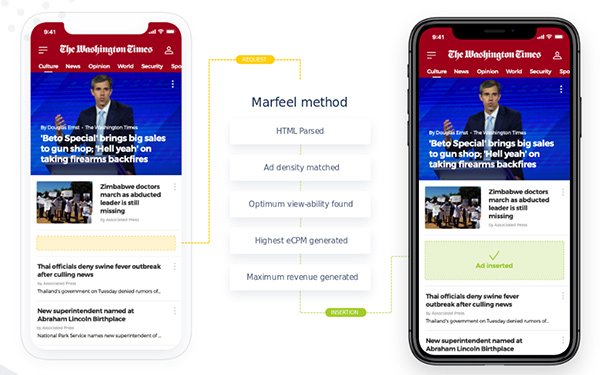 AdDealer maintains a suggested ad density of 30% for its publishers continuously through automated technology.

“Publishers will often configure their ad setup regardless of article size to stay at roughly 20% ad density because they lack a solution that can dynamically do this while staying as close as possible to the 30% summit. That forfeits potential ad revenue in the name of compliance," Marfeel Chief Marketing Officer Alexian Chiavegato told Publishers Daily.

With AdDealer’s density measurements and placements, they no longer face that limitation, he says.

The tech works through a specially designed algorithm that translates a page’s HTML and matches appropriate ad density with optimized viewability. During the process, the highest eCPM and maximum review are generated before the ad is inserted.

“This is an algorithm that is rolled out across more than 800 of Marfeel’s client websites. It goes through an appropriate round of testing before every change to the AdDealer structure,” said Chiavegato. The “algorithm is not static.” Marfeel’s team regularly optimizes it “to increase monetization for each publisher.”

As Marfeel prepared to launch the feature, it tested the algorithm with Marfeel’s UX/UI, analyzing more than 275 million sessions across 23 publishers. The technology works with ad formats that don’t detract from the user experience, according to suggested practices outlined by the Coalition for Better Ads.

“Marfeel’s philosophy is that better user experiences will increase engagement, time on site, and stickiness, which in turn, increases ad revenue,” said Chiavegato.

Marfeel uses Average Revenue Per User (ARPU), calculated by dividing the total revenue by the total traffic, as its guiding KPI to optimize ad placement.

“Therefore, you can use ARPU to show the impact of a change of ad placements, changes in the UX, or the value of traffic sources,” said Chiavegato. “It takes traffic fluctuations out of the equation to give an exact reading on the impact each change makes to every single user. It's a user-focused way of delivering monetization alongside a better user experience.”

For example, a case study with Euronews showed a 38% reduction in bounce rate, 69% increase in pages per session, 27% improvement in average session duration and a 207% increase in programmatic revenues.