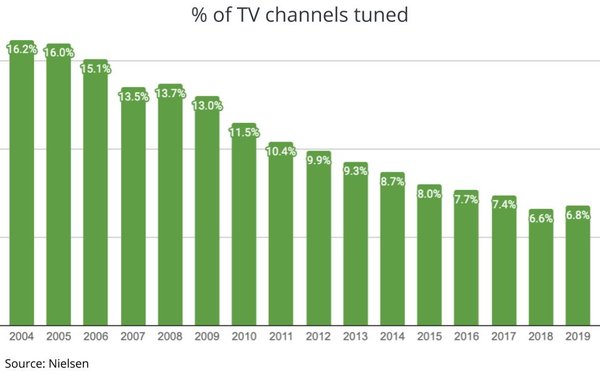 For only the second time since Nielsen has been reporting data illustrating the effect of TV channel fragmentation, the percentage of TV channels tuned actually rose last year.

The data, which Research Intelligencer analyzed via a special request from Nielsen, shows the percentage of TV channels tuned by the average TV household rose to 6.8% in 2019 from 6.6% in 2018, reversing a downward direction that has occurred every year except for 2008.

Detailed data analysis is available to subscribers of Research Intelligencer, but the top line is that the average number of channels received by U.S. TV households fell precipitously to 179.5 in 2019 from 191.8 in 2018.

While the average number of channels received has been declining since it peaked in 2005, 2019's 6.5% decline was a pronounced drop.

It could reflect that American households are cutting back on their subscription TV channel packages, especially as more of them move to premium and ad-supported OTT subscription services, but whatever the case, it is notable and something to keep an eye on.