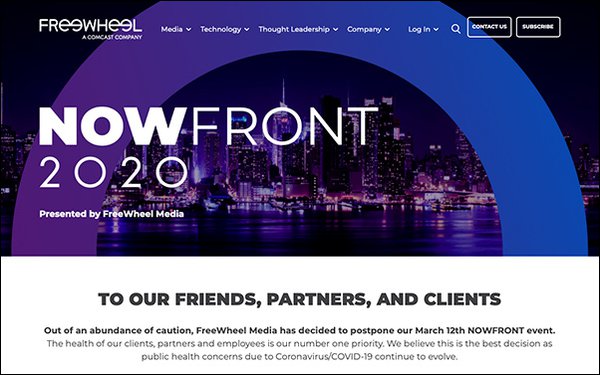 Adding to the list of media industry event cancellations, Comcast FreeWheel's upfront event is being postponed due to coronavirus concerns.

The big advertising technology company’s “NowFront” event for advertisers and media buyers had been scheduled for March 12 in New York. A FreeWheel representative said it hopes to reschedule the event.

The day before, Fox News Channel said it was canceling its upfront event -- scheduled for March 24th in New York -- also due to similar health and safety concerns.

The international TV market, MIP-TV -- which is held in the spring in Cannes, France, this year from March 30 through April 2 -- has also been cancelled.

Historically, big TV network presentations are made in the spring as a preview of new TV shows for advertisers and media agencies to consider in buying as part of year-long media schedules for the upcoming TV season that runs from September through August of the following year.

In recent years, digital media presentations have also been touted in the spring, with many under the so-called “NewFronts” banner.