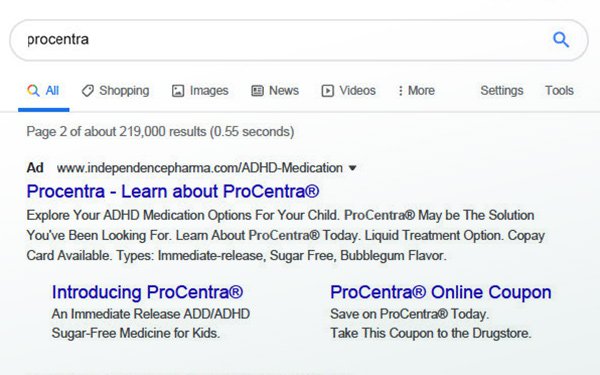 The FDA has issued paid search-specific warning letters to nearly 50 brands since 2009, and has issued several letters specific to social media recently in the past year.

This is the first warning letter issued that is specific to paid search on Google since 2014, according to Ian Orekondy, founder at AdComplyRx, which monitors and analyzes pharma digital media campaigns for compliance.

“It’s been five years since the last warning letter for paid search and five years prior to that,” he said. “It seems like the search industry is due to receive some attention from the FDA, but that’s pure speculation on my part.”

Orekondy said AdComplyRx data shows there are many companies running noncompliant ads -- about 40. They are all at risk of receiving a warning letter similar to the one received by Stefan Antonsson, CEO at Cincinnati-based Outlook Pharmaceuticals.

The Office of Prescription Drug Promotion (OPDP) of the FDA reviewed a sponsored link on the internet search engine Google.com for the drug ProCentra, an oral ADHD medication for children. The drug is distributed by Independence Pharmaceuticals on behalf of Outlook Pharmaceuticals.

The letter states that the Google ad is misleading. It goes against guidelines of the FDA Bad Ad Program, a sponsored program designed to educate healthcare professionals about the role they can play to ensure that prescription drug advertising and promotion is truthful and not misleading.

Orekondy said AdComplyRx works with some of the largest pharma manufacturers. Among the top 10 brands, he says, one of the biggest mistakes made is for the brand to traffic a branded display URL where they intend to traffic a vanity description URL that reads “prescription treatment website.” The second-biggest cause for non-compliance is running a branded site link on a benefits claim ad, so it appears in the display URL and site links.