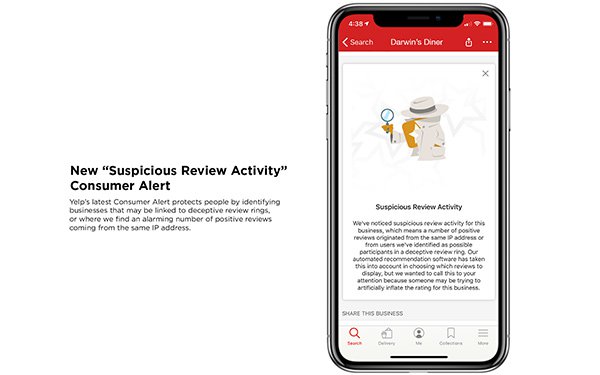 Yelp issued more than 1,300 Consumer Alerts in 2019 that span from identifying attempts to purchase reviews to informing consumers about businesses that may get more attention as their profile serves up higher in results than their customer service.

On Tuesday the company released the 2019 Consumer Alerts Report, outlining the results of an eight-year program designed to warn people about businesses with egregious or unusual review activity.

Noorie Malik, head of user operations at Yelp, wrote in a post that the automated recommendation software is the “first line of defense,” but the site also relied on its “vigilant community of users to help flag reviews and tip us off to any suspicious behavior they experience.”

As part of its Consumer Alerts program, Yelp received more than 1,500 cases from users last year.

Earlier this year, Yelp closed approximately 550 user accounts associated with one review ring. This led to a decline in providers offering fraudulent Yelp reviews, the company wrote in a post.

Last year Yelp placed alerts on more than 580 business pages to inform consumers when its algorithms and human monitoring techniques identified a disproportionate numbers of positive reviews from the same IP address -- typically a sign to inflate business ratings. Consumers will see this IP-related alert more often on restaurants, at 11.6%, and auto businesses, at 11%.

More than 300 businesses had a Consumer Alert placed on their page after Yelp received evidence or tips that someone was purchasing or incentivizing people for new or updated reviews, or offering compensation to remove critical reviews.

Social media posts, email or text message solicitations, or in-store signage will host these messages. Home services at 17% and restaurants at 13 are the types of businesses that receive these alerts more often.

About 35 businesses received an alert after Yelp obtained evidence that someone associated with the business may have tried to abuse the legal system in an effort to stifle free speech. Some 37.7% of Yelp’s Questionable Legal Threat alerts were placed on pages of home services businesses.

Businesses will sometimes receive this alert after placing a gag clause in their contracts with consumers, which is illegal under the Consumer Review Fairness Act, a federal law Yelp helped to pass in 2016.