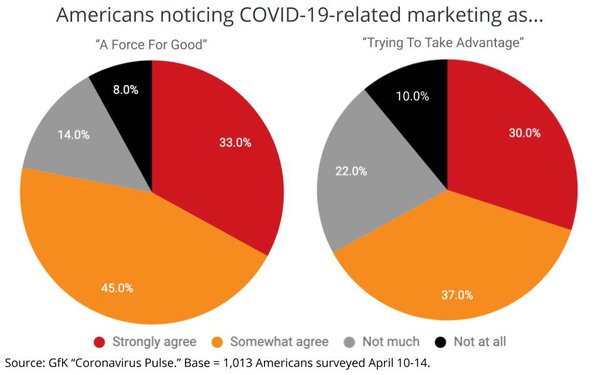 Pandemic-related marketing is creating a paradox of perceptions among American consumers, with a significant majority seeing both as a "force for good," as well as "trying to take advantage" of the situation. That's the top line finding from a "Coronavirus Pulse" fielded earlier this month by global marketing researcher GfK.

"Seventy-eight percent of consumers agree (strongly or somewhat) that companies have been acting as a “force for good” as the country copes with COVID-19’s effects," the GfK report finds, adding: "But 68% also say that they have noticed companies “trying to take advantage” during the crisis.

The study -- which was conducted among a nationally representative sample of Americans from April 10-14 -- is significant, because 83% of the respondents said that the way brands conduct themselves during the crisis will impact whether they do business with them in the future. That's up from 73% when GfK asked the same question in late March.

Not surprisingly, price gouging is one of the top ways that Americans see brands "taking advantage" of the situation, especially for essential products in short supply such as hand sanitizer.

While half (50%) of GfK's respondents blame other Americans for hoarding large quantities of such products, a quarter (24%) said marketers that make the products are responsible for he price gouging, while 26% blame large brick-and mortar stores and 32% blame online retailers.

GfK also discovered potentially negative perceptions of retailers that keep their stores open during the crisis.

"Four in ten (40%) Americans say that companies that keep their doors open “in spite of everything” are putting their workers at risk, while just 30% view those companies as helpful," GfK noted. 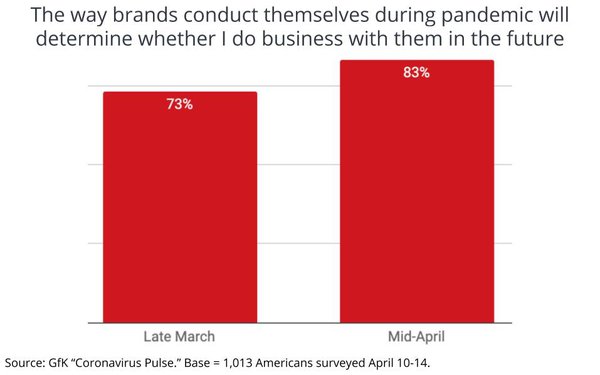