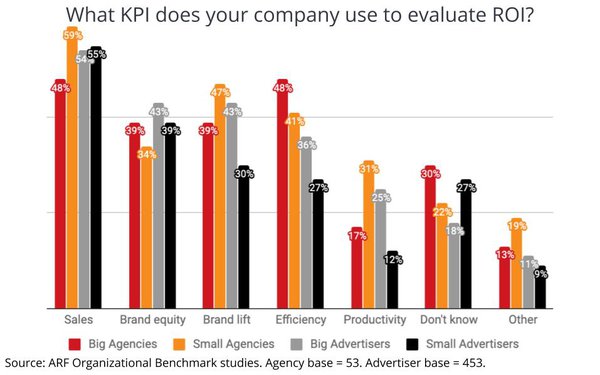 When it comes to the KPIs -- or key performance indicators -- used to evaluate the ROI of advertising, big agencies are far less performance-oriented than small agencies or their clients. That's one of the findings of the second in a series of "Organizational Benchmark" studies published by the Advertising Research Foundation (ARF).

The new study, which measures how research is organized within ad agencies, is being released this week, and follows a similar study the ARF conducted among clients, which was released late last month.

Looking at "sales" as a proxy for performance, small agencies indexed the highest, followed by both big advertisers and small ones, although it was the No. 1 attribute for all respondents. Among the big ad agencies, it was tied as the most-cited KPI along with "efficiency," which big agencies also over-index on.

Noting that advertising effectiveness researchers have long argued that "in general, long-term brand advertising should be 60% of the advertising goal, while 40% should target sales activation," the new ARF report points out: "Agency respondents have suggested, at least so far as the ROI of research is concerned, that they are putting more emphasis on sales than brand lift and brand equity."