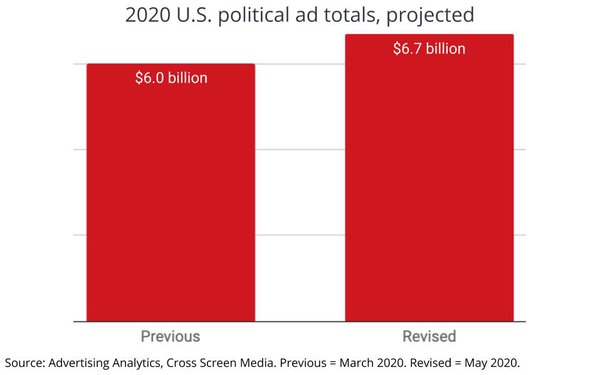 Due to higher-than-expected primary spending -- partly driven by the absence of live event campaigning -- political advertising is now expected to total an even bigger record of $6.7 billion this year, according to one estimate.

Advertising Analytics is raising its estimate by 12% because of primary spending, higher fund-raising, and what it says is the “lack of face to face campaigning” -- due to COVID-19 disruption.

So far, political advertising spend for this 2020 political season has totaled $2.19 billion -- more than $1 billion more than the amount spent at this point in 2016 and 2018 -- two big political election years.

The ad research group now expects spending by broadcast networks and stations to get to $3.56 billion; digital media, $1.82 billion; cable TV, $1.16 billion, and radio to $170 million.

Advertising Analytics projects that $443 million has been “reserved” so far for the fall 2020 period -- typically when political advertising begins to sharply rise.

In terms of digital spending, $605 million has been bought so far on Facebook and Google from some 13,000 advertisers-- $400 million spent in direct-response ads,  $145 million in persuasion ads