Even Product Placement Feels Pandemic Effect, Albeit A Modest One 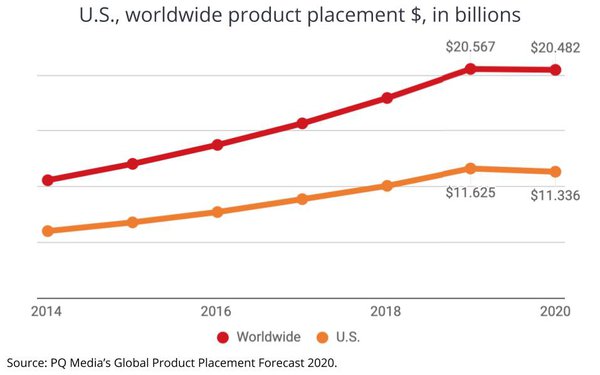 For the first time in recent memory, the product placement industry will shrink in 2020, due largely to the disruption of the COVID-19 pandemic.

Global product placement deals -- including the kind of branded entertainment deals that became the rage on Madison Avenue over the past decade -- will decline 0.4% this year, including a 2.5% drop in the U.S., which accounts for more than half (56.5%) of the total marketplace, according to annual estimates released this morning by PQ Media.

PQ's "Global Product Placement Forecast 2020" report estimates the worldwide market, which grew 14.5% to $20.57 billion in 2019, will be impacted by the pandemic due largely to the cancellation or postponement of much of the kind of filmed entertainment that brands like to place their products in -- or do branded entertainment content deals with -- including theatrical movie releases and TV shows.

TV accounts for about two-thirds of all product placement deals worldwide and in the U.S., although digital -- especially online streaming services and OTT -- is beginning to become a big factor in the industry as viewers migrate to these channels from traditional linear TV programming.

"Some of the choicest long-term opportunities are in the proliferation of [subscription video-on-demand] services worldwide just as the Coronavirus outbreak forced consumers indoors for longer periods, driving up viewing of OTT video programming," the report noted, adding: "While leading subscription video streamers Netflix, Amazon Prime Video, Disney+ and Apple TV+ don’t sell traditional ad spots on their respective services, the incidence of product placement and brand integration in their content offerings, as well as outright branded entertainment programming has soared in recent years.

"Among recent examples are Amazon’s 'Making The Cut,' a fashion designer competition in which the winning outfits and, ultimately, the chosen clothing line are sold via Amazon.com," it continues, also citing Netflix's recent 10part series "The Last Dance," covering Michael Jordan’s rise with the Chicago Bulls and its "organic integration of Nike sneakers."

2020's rollback, meanwhile, will be the "steepest decline recorded in 45 years," and only the second time it dropped since PQ began tracking it in 1975.