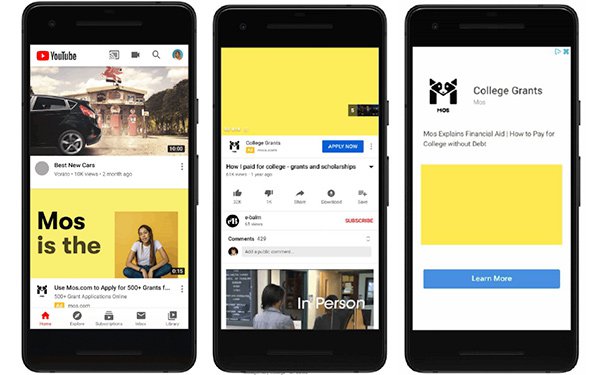 YouTube is experimenting with new ways to make video ads actionable, drive leads to increase performance, and automate content delivery across the platform.

Alphabet and Google CEO Sundar Pichai mentioned YouTube's direct-response business during the company's Q1 earnings call in April, saying it has been a profitable focus for the company. Advertisers requested the support.

As an increasing number of advertisers turn to video ads on YouTube that connect them directly with consumers, brands want more accountable and measurable media. Last year, the number of active advertisers using YouTube’s direct-response video solutions grew by 260%.

As the industry heads into the NewFronts, one way to support advertisers is through a more shoppable video ad unit being announced today. It offers an extension that adds product images beneath the video ad, so the image can be browsed, driving traffic to product pages.

Advertisers need only to sync the Google Merchant Center feed to their video ads and visually expand the call-to-action button with the best-sellers they want to feature and drive traffic to specific product pages.

YouTube data suggests that 70% of people say they bought a brand as a result of seeing it on its platform.

Aerie, a clothing brand, wanted to increase awareness and drive sales across several types of media for its 2020 spring campaign. It used YouTube as a full-funnel platform to connect with audiences who have the highest likelihood to purchase.

The feature automatically brings video ads to the YouTube home feed, watch pages, and Google video partners in one campaign.

The goal is for the platform to automatically serve the most efficient combination of video ads across the YouTube home feed, watch pages, and Google video partners to help drive sales, boost web traffic or find new leads.

Video Action campaigns will include any future inventory that becomes available, such as the What to Watch Next feed, helping advertisers save time and focus on initiatives such as drafting the right creative and messages for audiences.

Early adopter Mos, a startup that helps students find funds for college to avoid substantial student debt, tested the platform. In the last few months, Mos saw 30% more purchases for its service at a third of the cost compared to its previous YouTube benchmarks, YouTube said.

Adding Lead forms to the campaign help advertisers reduce costs. Jeep tested this approach with its Korea branch and saw a 13-times increase in completed leads at an 84% lower cost per lead.

People often switch between Search and YouTube to find new information that influences them in decisions what to buy. To help understand where the conversions come from, YouTube is now included in the Google Ads attribution reports.