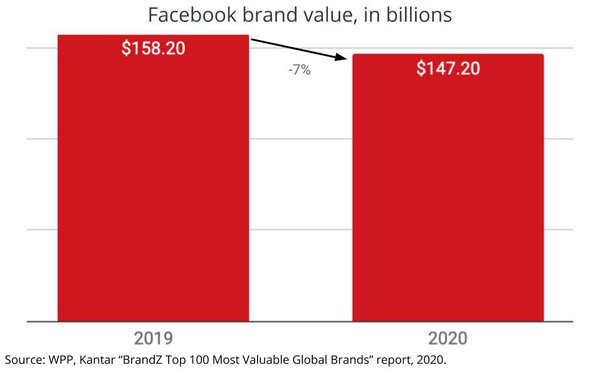 Much of the focus surrounding the impact of the big brand boycott of Facebook has been on its bottom line, especially its near-term ad revenues. But some new reports suggest it has something even greater at stake: Its brand value.

"Why does that matter," Needham & Co. equity research analyst Laura Martin asks rhetorically in a report sent to investors this morning. Because brand value is actually an underlying component of the actual "enterprise value" of publicly traded companies like Facebook, which basically means what they're worth.

Interestingly, both Wall Street and Madison Avenue utilize the concept of "goodwill," but in slightly different ways.

On Wall Street, goodwill is the intangible assets that compound the tangible values that create a perceived market value a company's shares have to investors.

On Madison Avenue, goodwill fundamentally is the underlying value of a brand.

While valuing goodwill -- on Wall Street or Madison Avenue -- isn't an exact science, Needham's Martin notes "an entire valuation industry" has emerged specifically for "attaching economic value to 'brands,' an intangible asset that sits above (ie., is in addition to) the value of the individual business lines of any company."

In her report, Martin notes that Forbes magazine has calculated Facebook's brand value -- including Instagram, WhatsApp, Facebook Messenger, etc.) at $90 billion in 2019, down 7% from 2018.

Interestingly, just this week WPP and Kantar released the 2020 edition of their "BrandZ Top 100 Most Valuable Global Brands" report, which coincidentally shows that Facebook's brand value once again declined 7% coming into this year. BrandZ also places the value of Facebook's brand at a much higher level than Forbes' estimates: $147.2 billion.

I don't know how that factors into Martin's calculations of enterprise value, but whatever that bottom line proves to be, Martin projects it's about to tumble once again, partly due to the current ad boycott movement by some of the most valuable global brands that have historically used it.

"Brands embed a brand promise and imply consumer trust," Martin writes, adding: "Facebook and Instagram's brands are under attack by brand advertisers, who are the subset of revenue that value brands most. We believe brand value is important to manage for all consumer-facing businesses because a strong brand drives: a) higher pricing power; b) lower customer acquisition cost; c) longer consumer loyalty (ie, lower churn); and d) faster trial of new products like Instagram and/or Facebook Messenger (ie, strong branding gets more consumers to try Carmel M&Ms faster).

"By implication," she continues, "the valuation at risk by Facebook's falling brand value represents 15% of its total enterprise value today."

I'm going to guess that it's an even greater share of its true enterprise value if you utilize other brand valuations, such as BrandZ's, but ultimately, it's about the goodwill all of Facebook's stakeholders feel in the company -- not just its investors, or even its advertisers -- big or small.

Other key stakeholders integral to Facebook's brand -- and enterprise -- value, including its "users," "influencers," regulators, content partners, and yes, even the press that covers it.

Over the decades that I've covered the concept of "goodwill" and brand value, I've often wondered why there's not inverse terminology -- you know, "badwill."

Because the real problem for Facebook isn't just the loss of its goodwill value. It's the fact that its actions -- and inactions -- continue to demonstrate it is exuding badwill throughout the world.