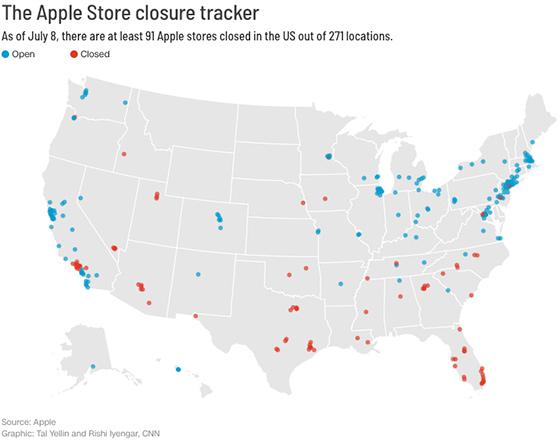 Apple shuttered all its U.S. stores in mid-March because of COVID-19, re-opened a little more than 100 in late May and then temporarily re-closed more than 70 of its 271 stores across the United States in mid-June, including all the outlets in Florida and Texas, reported CNN Business.

The media outlet suggests Apple has “arguably become something of a barometer for how the pandemic is affecting different parts of the country -- and the start and stop cycle of re-openings in various regions.” The question is how.

As COVID-19 cases rose in California, Texas and Arizona, Apple opted to shut stores in those states. Not long after, Governors of those states would either pause or roll back re-openings.

Mobile location data tells a story many people just cannot see. So CNN built a map to track Apple Store closures across the U.S. to provide another window into the health crisis.

Can Apple predict an outbreak based on the data it collects? There are a handful of companies that began tracing the movement of people during the onset of COVID-19 based on the software development kit in their mobile phone.

The SDK is used by app developers to build user profiles, but that information is often sent to app developer and third parties that sell the data to marketers and data brokers.

Mobile phone users likely don’t know the type of information leaving their device. Many times the SDK has been called the equivalent of a browser cookie.

“If [a] developer wants to let users sign into an app with their Facebook accounts, they’d want Facebook’s Login SDK. If their app needs maps or map data, they could use Google’s Map SDK,” according to one report. “Without SDKs, developers would have to build those things entirely from scratch, which is time consuming and beyond a small developer’s abilities or budgets."

Are there SDKs in the apps of iPhones? Yes.