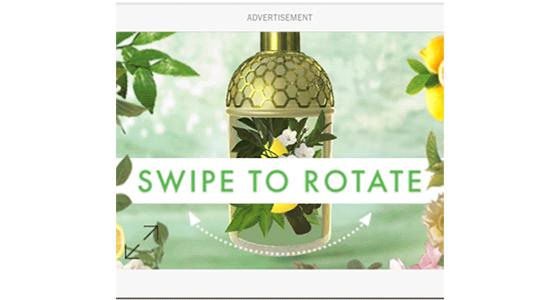 The new format -- made available Thursday to all advertisers using Display & Video 360 globally -- enables consumers provides a 360-degree view to explore products in the display ad by zooming in or out and rotating the product or playing an animation.

Google launched the ad unit in beta June 2019. Since then several brands have used the ad format, such as Purina One, Nissan Spain, Adidas Latin America, and Belvedere Vodka.

When Nissan looked to increase the engagement of users with their creatives for their compact crossover SUV, the Qashaqai, the creatives highlighted the driving features that were difficult to show in a static display ad.

Nissan Spain and its agency Nissan United partnered with the creative agency QReal to create Swirl ads. Engagement performance rates on average were eight times higher than rich media benchmarks for the automotive vertical, according to Google.

To determine available inventory, Google suggests creating checking the Inventory Availability report. It will provide the predicted number of impressions that match specific targeting criteria, which can be useful for determining the overall scale of a campaign.