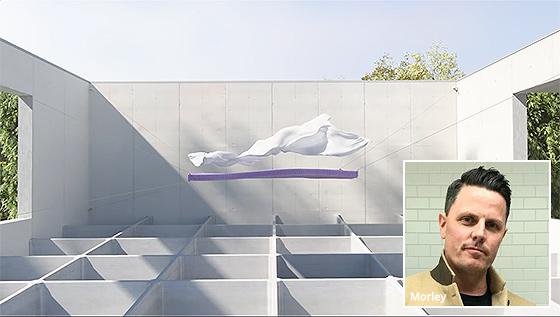 Selling mattresses is a lot like selling cars … or hamburgers. Take your pick. Both wildly different product types apply to a sleeptime line in their own ways, we discovered in talking to Burke Morley, Purple Mattress VP of Brand and Executive Creative Director.

The D2C Bed-in-a-Box category has gotten very cluttered very quickly. Morley is trying to brand his way out of the pack by highlighting Purple’s innovations while at the same time tapping into more primal “craveability.” In this week’s column, we touch on some of the surprising ways the brand is finding new entryways into consumer minds and how Morley is taking inspiration from marketing in other categories.

Morley: We're a digital first and digital native brand. When we launched Purple, we caught lightning in a bottle. The campaign "Goldilocks" was one of the first infotainment-style commercials. It did incredibly well. Purple took off quickly. We've continued to be digital first with our media mix, although we have started to introduce more TV and more traditional outlets as well. And we're shifting into more premium spots. Doing fewer but better spots with better locations has been really helpful for us.

MediaPost: You guys used to have it down pretty much to a science on the number of touch points it would take to move people towards the buy. You were measuring everything and accounting for every penny of spend. Is that still true?

Morley: Absolutely. We A/B test different spots to see what people are responding to. We're introducing something new, where it's more about building brand awareness, affinity, and we want to lean into the fact that we have some true innovation. That differentiates us from the rest of the pack.

MP: You have the distinct advantage of having a color on your side. The color is a major component of the product itself.

Morley: Absolutely. The other day I was walking from my car to my house and there was a really beautiful sunset. I took a picture of it and later I realized that the sky was actually turning purple.

There's really two times when we care most about our customers — and that's how did they wake up and how did they fall asleep.

The thing that's really cool is the universe actually conspires with us and turns purple those two times. As we've done the brand refresh, that has become the color palette of our brand. It's purple, but it's also peach, and even some greens. Some yellows and some different beautiful colors make up the palette of a sunrise and a sunset. We call it Purple Dawn and Purple Dusk.

MP: Let's back up into the COVID crisis. Tell me how you experienced it, what you saw and when.

Morley: One of the things that was most interesting and most dramatic was that about half of our business was in wholesale. When all those stores shut down, essentially 50% of our business just stopped one day. But a lot of those consumers shifted into our D2C business online. And we started to perform better than last year for a combination of reasons.

Another thing is, we had some categories that were sleepers, specifically seat cushions. Well, it's time for this quiet little product to have its time in the sun. We started to promote it and it's just blown up. Our sales increased hundreds of percent over the previous year. It enabled people to turn their kitchen chair into an office chair. Everyone's sitting on things that weren't meant for people to sit on for long periods of time.

MP: So, you saw an opportunity where Purple could shine and perhaps grab some market share. Did you succeed, and what were the key things in moving the needle?

Morley: One of the things we've talked about as a team is, let's create other doorways into the brand. Let's not force people to only be able to experience the brand, the innovation through the investment of a mattress. Being able to do things like seat cushions and even pillows ... .

We came out with a pillow last year called the Harmony Pillow. It's a much cheaper price point but it showcases the innovation and all the good stuff that Purple's all about. We came out very humbly and just called it the greatest pillow ever invented. People are experiencing that pillow, coming in and more curious to invest in larger purchases like a mattress or bed frame.

MP: You mentioned that Purple had been a pioneer of the funny infomercial style of pre-roll.  Everybody copied you and you were looking for the next thing. Tell us about this rebranding effort from a creative side. What is the new approach?

Morley: I have experience at lifestyle or performance brands. I've been at Nike, most recently I was at Sonic. I helped launch Hollister, American Eagle and other brands like that. One of the things I've tried to do is look at how we brought those brands to life in a compelling, interesting way and apply them to an industry that might feel like it may not be a fit.

Our ads before talked a lot about what our product was, a wall of words. I've challenged the team to, instead of talking about what it is, let's show how it feels, what it feels like to touch the mattress, the pillow, the sheets.

At Sonic, we did something where we would show how it tastes. When we shot a burger, it wasn't below your eye level. We raised it up so it was what we call a hero shot because that's what you see when you're about to bite the burger. Those little tweaks made a huge difference.

The other thing we looked at was craveability.... We were trying to tap into that visceral reaction. We realized it was things like cheese being pulled and bacon sizzling and heat cues.

[At Purple,] we realized there's craveable moments with sleep and the bed. There is this giddiness right before you climb into bed after a long day, a visceral reaction. We want to own tactility, we want to own texture. We want to lean into innovation and own these different pieces we have in our grid. We have geometric shapes that are unique to us. We can lean into those things from a visual standpoint and feel very different, very fresh.

MP: How does the media plan change as a result of this new creative and rebranding effort?

Morley: There's the higher-level storytelling, innovation stories that we want to unpack over time. Buying a mattress is closer to the experience of buying a car than it is buying a shirt or shoes. What we're talking a lot about is we need to be better at being on the tip of people's tongues and in their minds when they get into that place where they're ready to buy a mattress because that's not an easy thing to predict.

We want to be in that top consideration so we are doing more brand storytelling and brand campaigns, where before it was about price, about convenience. We need to deliver all those pieces but our intention is to click up above that to be a brand that people really care about.

We want to be known as a comfort company but we have to win in that sleep category first to earn the right to go into these other places.

MP: It's interesting that you mentioned the car company because you're describing it the way the auto industry describes its purchase funnel as a consideration set of four or five models.

Morley: We feel that same way, we want people to see Purple a certain way. Hopefully, it's, "I feel like they're innovative, they're comfortable. There's a lot of value there and there's something that I want to learn more about."

MP: Five, six years out, where does this market have to go? How many of you guys can be sustained?

Morley: Last year, J.D. Power came out with a new category of mattress called Bed in a Box and we won that. But we want to be considered with the more high-end, more performance and innovative mattresses and sleep solutions like Tempur-Pedic and Sleep Number.

A lot of companies will not survive because the novelty wears off of being first to market.When warranties start to come through and people have slept on them for a while, how do these mattresses hold up over time.

It's important to note that in spite of all of our marketing efforts and investment, our number one channel of revenue and sales is still word of mouth. It completely overshadows YouTube and all the social channels because when people try it, they fall in love with it and they tell their friends. Our biggest seller is other people.