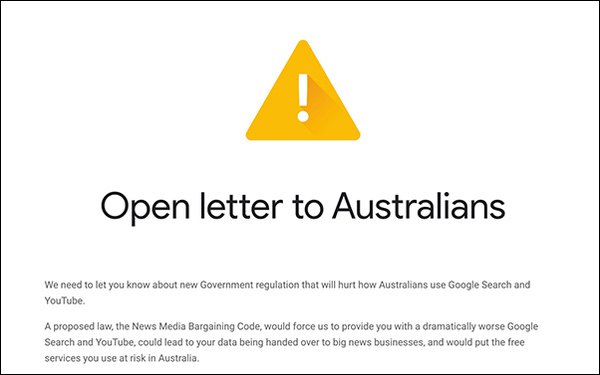 Now an open letter from Google clearly aims to make Australian content creators and artists aware of a proposed new law, known as the News Media Bargaining Code, that could have a significant and negative impact on the continent.

The letter highlights concerns that traditional news and its publishers are prioritized over smaller creators of content and the platforms where they find an audience, even when that audience is worldwide.

"Under this law, Google has to tell news media businesses 'how they can gain access' to data about your use of our products," wrote Mel Silva, managing director, on behalf of Google Australia. "There’s no way of knowing if any data handed over would be protected, or how it might be used by news media businesses."

Australia's antitrust regulator accused Google of misinformation after the company warned that a new law could allow for the sharing of user data.

In July, Reuters reported that if Google and other platforms could not agree with the Australian media businesses on pricing after three months, the government would appoint arbitrators, per the proposal.

Google stated that the company is particularly concerned that it provides unfair advantages to large news businesses over anyone else online, including the very creators that make and create the content available on YouTube.

Silva wrote in a post that the company believes in the importance of news to society and that it has been partnering closely with Australian news media businesses, already paying them millions of dollars and sending them billions of free clicks annually.

"We’ve offered to pay more to license content," she wrote. "But rather than encouraging these types of partnerships, the law is set up to give special treatment to big media companies and to encourage them to make enormous and unreasonable demands that would put our free services at risk."

Under the new laws: