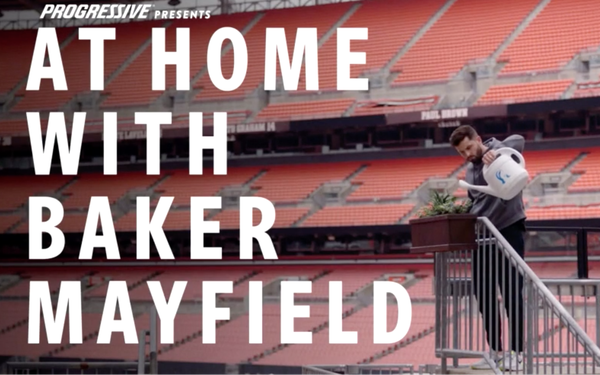 Progressive is bringing back the NFL’s Baker Mayfield in one of two homeowners’ insurance campaigns that intend to resonate no matter what the outcome of this NFL season.

The NFL is always a "must-see" during the fall, says Progressive CMO Jeff Charney.

"This year, there will be more eyeballs and excitement on the game than ever before," Charney tells Marketing Daily. "While everyone’s navigating uncertainty, we purposefully designed both campaigns to be contextually relevant across a number of 'at-home' situations and scenarios homeowners face. Even if something were to happen to the football season, viewers will still enjoy relatable situations off the field regardless of what the NFL season looks like this year."

Building off the momentum of last year, Progressive will return with Season Two of "At Home with Baker Mayfield," picking up where we left Baker last navigating home ownership on his home turf. Mayfield is quarterback for the Cleveland Browns, not far from Progressive’s headquarters in Mayfield, Ohio.

Season Two finds Baker in a new set of situations that are relatable to every homeowner -- especially as we're all now spending more time than ever before at home.

This season will also feature some special guests, including Baker’s wife Emily and Bobby, the groundskeeper, who were also featured in Season One, and Baker’s teammate Jedrick Wills.

"We’re all spending more time at home, making the content -- and the message of home protection -- more relevant than ever," Charney says. “They’re also based on simple 'funny because they’re true' insights, which are the most relatable. We anticipate people will turn to sports for a release from a very difficult year and our hope is to help make them smile.”

Progressive will also introduce the newest additions to its network of characters in a new "show," "Sticking Together with Mark & Marcus."

Mark and Marcus are two friends who show what life is like when two iconic fixtures of an NFL game (yard markers) finally leave the field, putting these familiar football roles into unexpected, but all too familiar, situations at home that highlight the hallmarks of home ownership. The spot was directed by Jared Hess (Napoleon Dynamite, 2004).

Both campaigns, from Arnold Worldwide, launch September 10, coinciding with the start of the NFL season.

The spots, in 15-second and 30-second versions, will run on national TV and digital channels with an episodic approach, with new spots rotating in periodically for the duration of the season in a contextually relevant manner.

"At the heart of our campaigns is a consistent brand message: Progressive is there to protect your home, no matter where that may be," Charney says. "This year, as people spend more time at home, that part of their life has taken on a new meaning, and these campaigns are more relevant than ever. We also recognize that our 'network' of advertising campaigns helps to offer a little humor when so many are looking for that sense of relief right now."