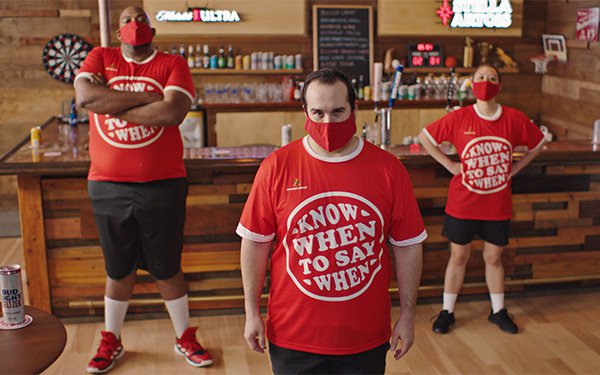 Anheuser-Busch is releasing a new “Know When To Say When” message ad, which since 1982 has been the centerpiece slogan from the beer maker to encourage responsible drinking.

This time, though, it is flavoring the ad with a social distancing subtext -- and it's masks all around.

The commercial introduces the “Know When To Say When All-Stars” purported to be bartenders who are “helping you to enjoy responsibly, and socialize safely.”

Adam Warrington, Anheuser-Busch vice president of corporate social responsibility, says the beer maker has spent over $1 billion on responsible drinking efforts in the past four decades.

This ad, Warrington says, is also an acknowledgment of “our special relationship with our on-premise partners, laddering up to our partnership with the National Restaurant Association” and wholesaler retailers, and, of course, the wait-staffs, who have a tough time outlasting the virus.

The bartender who is the "hydration expert" throws around bottles of water to patrons who may have been overserved. Another bartender, the travel/logistics expert, congratulates a patron for ordering a car-service ride home. A third, the snacks-expert bartender is the one who “helps you remember to have some food with those brews.”

Although this Labor Day weekend marks the beginning of the sports season, when beer ads saturate the airwaves, this one-minute ad will play only on social-media outlets.

There are no TV plans for it at this point, but the ad is undoubtedly pegged to those sporting events. “Sports is back and we’re re-opening. That means doing what it takes to keep everyone safe,” says the boss of these bartenders.

The ad was directed by David Ebert for Praytell, a creative communications company. The production company was Gum Zoo Pictures, which specializes (especially these days) in creating safe environments for video shoots, ranging from the safest way to apply makeup to ensuring there are ample hand-washing stations on set.

By focusing on the bartenders, Anheuser-Busch is continuing a theme to help bars and restaurants during the COVID-19 crisis.

In May, Bud Light kicked off its Certified Fresh campaign, in which it made a point of letting the public know it had replaced beer that might have gotten stale when bars were forced to close. It also created a website directory for Bud Light drinkers to find a list of places that were selling beer to go.

For most of the commercial, the “Know When” all-stars wear masks. Tellingly, the three bartenders plus the boss outnumber the two customers, each sitting by themselves and far from each other.

That's a nod to social distancing -- and inadvertently, for sure, depicting bars are now lonelier places. This spot is not alone in trying to sell a social product in non-social times.

An ad for Anheuser-Busch product Stella Artois, set to the song “(What a day for a) Daydream” revolves around people (including some well-known stars) who cavort around their apartments and empty streets, mainly accompanied by no one except their imaginary doubles.