eMarketer has forecast that the COVID pandemic will drive a 14% decline in U.S. brick-and-mortar store sales this year, as ecommerce grows 18%, to achieve a 20% share of total retail sales.

As a result, many brands, including Nike and Levi Strauss, are rapidly shifting toward direct-to-consumer-driven strategies.

That, in turn, has led to increased use of video, confirms Brightcove’s Global Video Index: Enterprise & Retail Edition. The index is based on more than 400 billion data points from thousands of its customers collected each quarter.

In this year’s second quarter, global views of retail and other marketing videos among Brightcove clients were up 114% year-over-year across all devices, according to the report. North American retail/marketing video views rose 110% across devices. 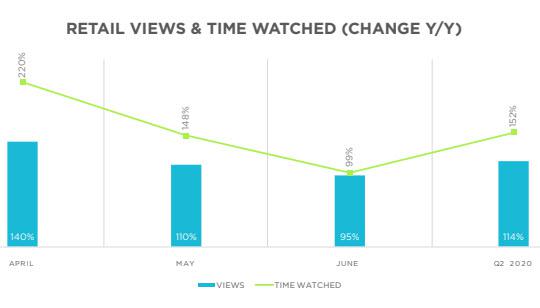 Global retail/marketing views on desktop and laptop computers maintained a majority share (52%), and more than doubled YoY (+114%) in the quarter, although the growth declined from 158% in May to 89% by June.

Tablets saw views increase 13%, but continued to lose share to smartphones, ending the quarter at 5% versus 9% in second-quarter 2019. And tablets’ growth declined from 18% in April to under 1% in June.

The real news was in connected TVs. While they still command less than a 1% share of total views, they saw the largest growth in the quarter: 307%.

CTVs also maintained their growth momentum better than other devices. Their views grew by 383% in April, 309% in May and 223% in June.

Connected TVs again showed the greatest percentage growth, as viewers spent more time at home and with the big screen, particularly in April and May.

CTV time watched shot up 1,060% YoY, including growth of 1,441% in April and 1,065% in May. Growth moderated to 684% in June, as users returned to some degree to more established viewing habits. Total time watched on CTVs in June was just 52% of total time watched in April.

In recent months, CTVs’ share of time watched, compared to other devices, has been small, generally under 1%. But the surge in time watched during the second quarter pushed its share to just more than 3%.

But computers still lost share, slipping to 65% from 68% a year ago as a result of smartphones’ and CTV’s increased shares.

Time watched on tablets was up 105% YoY in the quarter, but also lost share to smartphones and CTV, finishing the quarter at less than 6%, versus 7% a year ago.
ctv, d2c, digital, ecommerce, mobile, retail, smartphone, television, video
Next story loading