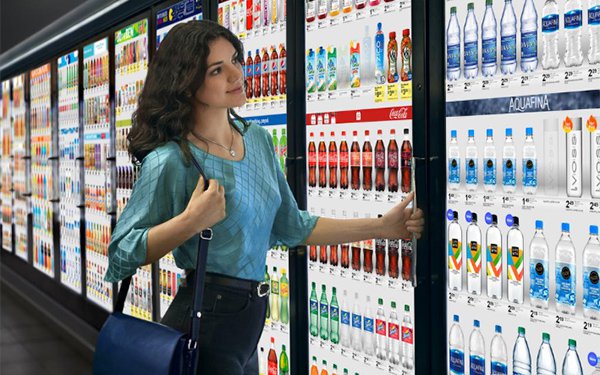 The technology, embedded into glass doors that consumers open when reaching into refrigerated sections in stores, has caught the attention of several high-profile investors.

The funding will drive company growth and expansion in the United States and Canada. Silicon Valley Bank also participated in the round by providing debt financing.

The technology can determine textually relevant ads or promotions to target in the store as consumers stand in front of the refrigerated section to scan the coolers and the freezers before making their decision on what to buy. “Brands want to connect these platforms on the last mile, right before checkout,” said Cooler Screens CEO and co-founder Arsen Avakian.

Technology investments will run the gambit. Avakian said Cooler Screens’ engineers are working to build out a digital merchandizing platform to bring ecommerce capabilities online, as well as a contextual data engine that lets brands have an “identify blind” approach to message consumers.

The in-store technology, which demonstrates performance nearly immediately at the point of sale in the store, continues to attract retailers.

Since its founding in 2018, Cooler Screens has raised more than $100 million in capital, valuing the company at more than $500 million. The most recent funding will advance Cooler Screens’ rollouts at several retailers like Walgreens, its Privacy by Design initiatives and the development of its technology platform such as contextual advertising and digital merchandising capabilities.

Walgreens, for example, plans to expand its platform into 2,500 stores across the U.S. The expansion, which is the largest installation of Cooler Screens’ technology, is expected to reach more than 75 million consumers monthly, including 2.5 million in-store consumers on a daily basis at Walgreens alone. The advertising company also continues to work with several large grocery and convenience stores, including Kroger and GetGo.

Integration and speed are important. Cooler Screen’s innovation with core technologies like Azure and artificial intelligence from Microsoft and full suite of 5G connectivity from Verizon has resulted in unique platforms at the point-of-sale. It also enables more than 100 CPG brands to connect with shoppers in stores.

There’s been some discussions of expanding into Asia and Europe, but nothing to talk about at this time. “Going into global markets presents another level of complexity,” Avakian said.