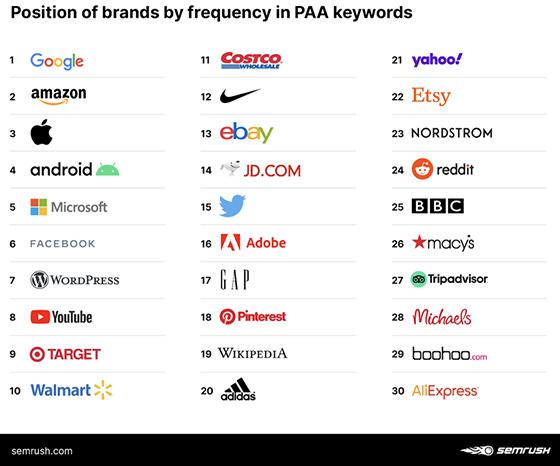 Knowing the question words — such as can, why, how and will — that trigger Google’s People Also Ask (PAA) feature has become important for search engine optimization professionals and content strategists.

The People Also Ask box -- an interactive, universal search result from Google -- displays a box of questions that other searchers have asked in relation to the person’s original search.

The data also provides insight into how businesses can implement an effective SEO strategy related to Google’s People Also Ask, which provides alternatives to the query and possibilities for people searching to find the content.

The chosen random dataset for the analysis represents the general trends in search results. Keywords were not filtered by volume, length or other parameter.

It turns out that overall the percentage of SERPs with PAA that also contain a FS is much higher.

The data show featured snippets are more targeted and generate less frequently than PAAs, which often appear alongside other features such as maps for “where” queries. This supports the idea PAAs are, in part, are triggered as query refinements for the kinds of questions Google might struggle to interpret, according to SEMrush.

The data also shows four types of information blocks that can appear when someone clicks on a PAA question. The percentage of PPA questions by answer type include Paragraphs taken from website content at 78.6%, Lists at 13.8%, Tables at 4.3%, and Videos at 3,3%.

It’s also interesting to note that the longest paragraph answer within a PAA block within SEMrush’s dataset came in at 132 words and the shortest was one word.

SEMrush also wanted to know the types of words triggering PAAs and Feature Snippets in organic search results, so the company collected keyword data based on question searches that analysts knew contained a featured snippet, and then tested the percentage of these terms that also included a PAA box.

In the analysis, SEMrush explains that clicking on PAA result will slide open an answer from a website, along with a link to the page providing the answer. It also simultaneously triggers new questions that Google adds to its PAA box.

Since first testing this feature in April 2015, SEMrush Sensor data estimates the average percentage of search engine results pages with PAA has grown to between 40% and 42% for both desktop and mobile.

PAA results are six times more likely to appear within a SERP than a featured snippet result. SEMrush research shows the importance of this feature. The frequency of PAA results has consistently risen on both mobile and desktop for the past few years.

Perhaps one of the major reasons is because Google wants to continually reduce the time required to serve up exact answers.

It does this through a property metric and data available through its knowledge graph, but also through other features such as rich snippets, featured snippets, and People Also Ask results, according to SEMrush.

In SEMrush’s keyword dataset, PAA results appeared in 49.37% of search results for desktop and in 52.27% for mobile.

Splitting this data across 25 industries shows PAA results vary from 9.5% in the Real Estate category to 64.2% in Computers & Electronics.

A large proportion of searches in “real estate” include “apartments in [location],” which have very clear intent and are one of the few types of search terms that primarily return “ten blue links,” according to the findings.

SEMrush analyzed 6,000 “apartments in [location]” phrases, and discovered that only 2.5% of them produced a PAA result.

The data also showed most major brands will trigger PAA results, regardless of the industry they are in. For example, a query for Nike might trigger a PAA such as “What does Nike stand for?”

Some 58% of the time, the PAA boxes are seen after the first organic result, whether it is a standard blue link or another type of result, such as a featured snippet.

Unlike featured snippets, which count as a standard top 10 ranking, it is possible to have a presence inside a PAA box and rank on the first page of results. The data showed 13% of sites present inside the PAA box ranked in the top three organic results.