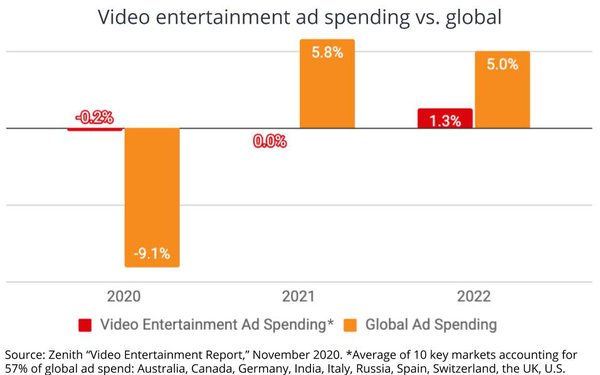 Video entertainment ad spending, which has been accelerating faster than most categories thanks to the aggressive introduction of new over-the-top and streaming video services in recent years, will decline this year and will remain flat next year before rebounding again in 2022, according to new estimates being released today by Publicis Media's Zenith unit.

But while video entertainment ad spending will fall 0.2% this year in the 10 key markets representing more than half of worldwide ad spending analyzed in Zenith's "Video Entertainment Report," it will nonetheless perform significantly better than the 8.9% decline in overall ad spending projected for those markets this year.

In the analysis, Zenith defines "video entertainment" as "long-form video content, supplied either by conventional television or online, including free TV, pay-TV and online video-on-demand platforms."

“Consumers are currently benefiting from a generous supply of video content from brands vying for their loyalty,” Zenith Head of Forecasting Jonathan Barnard notes, adding: “This competition is providing a large boost to video entertainment ad spend this year. But this level of investment in both content and advertising will prove difficult to sustain for the longterm, and we forecast very little growth in 2021 and 2022.”

While the category is projected to remain flat in 2020 and expand modestly in 2021, Zenith projects the U.S. will remain the "only market where video entertainment ad spend" continues to decline.

A main reason for the flattening and decline of the category is that many online video entertainment services "will have less capacity to raise budgets after spending heavily in 2020," the report explains, noting the "traditional TV broadcasters will be weighed down by shrinking revenues from TV advertising and pay-TV subscriptions."
ad spending, cmmr, covid-19, digital, entertainment, ott, streaming, television, video
3 comments about "Zenith: Video Entertainment Ad Spending Crashed This Year, Will Remain Flat Until 2022".
Check to receive email when comments are posted.
Read more comments >
Next story loading