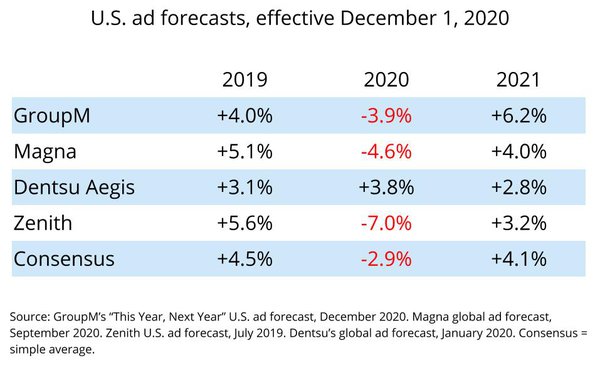 Madison Avenue's consensus outlook improved significantly for this year and next with Tuesday's release of GroupM's year-end forecast. GroupM reduced its projections for U.S. ad-spending contraction in half, from its June forecast calling for a 7.6% drop to its current expectation of 3.9% decline in 2020.

That brings the current agency holding-company consensus to a decline of 2.9% for 2020, although both IPG Mediabrands' Magna and Publicis Media's Zenith expected to update their official year-end outlooks on Monday.

Given improving expectations for the U.S. general and advertising economies, breakthroughs on COVID-19 vaccines, and the transition to what is expected to be a more stable White House, expect both Magna and Zenith to upgrade their outlooks as well.

In its release of its last U.S. ad forecast in September, Magna lowered its 2020 ad outlook three-tenths of a point from its prior forecast, calling for a 4.6% decline in U.S. ad spending during 2020.

In the last release of its 2020 U.S. advertising forecast in July, Zenith projected a 7.0% decline.

It the release of its last U.S.ad forecast in December 2019, Dentsu projected a 3.8% gain, albeit before the pandemic's impact on the U.S. and global ad economies.

GroupM had already been sending strong signals for an improving advertising marketplace in recent months.

For 2021, Madison Avenue's consensus outlook now stands at +4.1%, though look for that to improve as Magna and Zenith release their projections, too. 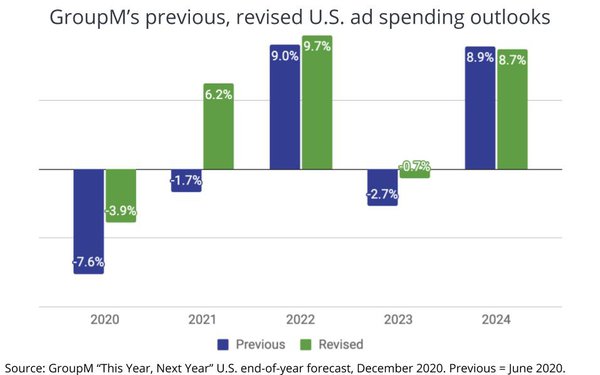