AT&T Chief Implies Direct-To-Consumer Is The Ultimate Window, But Will Remain Flexible 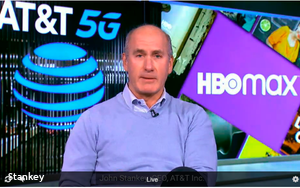 The future of filmed entertainment marketing and distribution has changed fundamentally during the pandemic -- requiring more “flexibility” and hedging -- but the ultimate window is the one with the end-user, John Stankey, CEO of AT&T said this morning, explaining his company’s decision to distribute all of Warner Bros.' 2021 theatrical releases simultaneously in theaters and on its own HBO Max streaming platform.

“Our approach has been to lean into where things are going,” Stankey said during the opening keynote on Day 2 of UBS virtual media industry conference this week, adding that doesn't necessarily mean sticking with “what model worked for several decades.”

He defended AT&T’s decision despite backlash from theater owners and Hollywood’s studio community, because the pandemic fundamentally changed consumer behavior and because they have many options for accessing filmed entertainment content.

AT&T’s hybrid solution of simultaneously distributing to theaters for those consumers who will feel comfortable “congregating” in theaters, and direct-to-consumers subscribing to HBO Max, offers a “win, win, win” situation for consumers, movie makers, and AT&T, be removing a potentially significant friction to watching movies.

If things change in the near- or long-term future, Stankey said AT&T will adjust its marketing and distribution plans, as well, but that in the meantime, the decision has already been a boon for HBO Max.

He said that HBO Max’s subscriber base already has grown about 47% -- from 8.6 million subscribers reported at the end of its last quarter to about 12.6 million currently -- and that the time spent by the average HBO Max subscriber has jumped 36%.

He cited the release of original films direct-to-the platform as part of the reason for that growth, and alluded that HBO Max could eventually become its own direct-to-consumer critical mass platform.

“This is really what’s under it,” he said, adding: “It’s to move scale quickly and to give our customers choice. We care about theatrical, and we care about streaming.”

As controversial as the hybrid model may seem, Stankey said AT&T is being careful to do it in a way that is “respectful” to theater owners, while ensuring that AT&T can maintain and build on its relationship with consumers who want to watch its films.

He implied that the critical mass number for a platform to reach self-sufficient critical mass was about 40 million to 50 million, but maintained that AT&T’s plan is to remain flexible and to continue adjusting its marketing and distribution models over time based on consumer behavior.

He alluded to the company’s forthcoming plans for a AVOD -- or ad-supported video-on-demand -- service, as well, noting that it doesn’t necessarily have to be a binary choice between content paid for by advertising or consumers themselves, and that it’s possible some in-between models like MVPDs and/or vMVPDS underwriting the cost of advertising-free variants would be another scenario.

Ultimately, he acknowledged that AT&T has many stakeholders in the marketing and distribution of its filmed entertainment product, as well as potentially its sports, news and other live event programming, but he implied that however it finds its way to them, consumers are the company’s ultimate window.

“You’re going to have to have some relationship with the customer, and some core IP,” he said, noting it won’t be enough to be a content “aggregator” in the future.

In the end, he said, the most successful entertainment programming marketers will have a direct relationship with consumers.