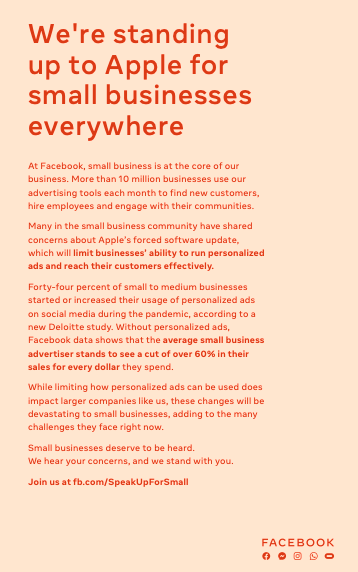 Facebook ads running Wednesday in The Wall Street Journal, The New York Times, and the Washington Post slam Apple over its privacy change, claiming it will hurt small businesses that rely on ad targeting.

The company also published a new website with the headline "Small businesses deserve to be heard," explaining the change to iOS14, Apple’s operating system, which will affect opt-in procedures for its identifier for advertisers (IDFA).

The ads lead readers to a link for the website that highlights interview videos from business owners who talk about the change. Small business owners say it will kill their business. They are already dealing with the backlash from shutdowns and restrictions as a result of COVID-19, and now they will need to find other ways to personalize their ads to consumers.

Conor Ryan, co-founder and CIO at StitcherAds, believes Facebook’s interests are alighted with advertisers. Facebook, however, is far more concerned with small advertisers because that’s where the vast majority of revenue growth will come from.

StitcherAds, which sits between Facebook and advertisers, believes this move by Apple will increase the price of products for the end consumer as the cost of advertising those products will rise. It’s a double “whammy,” considering this will happen in tandem with reverting to highly interruptive and annoying advertising experiences for those consumers.

He liken it to removing the ability for big brands to advertise on TV.

“FB represents the TV screen for SMBs,” he said. “The cost of products will rise as ads will become more expensive and less relevant it’s like reverting back to spray and pray advertising of the 1980s. Not only hurting the small business advertiser but also the small business app makers by requiring them to comply or being booted from the app store”

There are grave consequences, he said, calling it a step back from personalized identity based on based advertising to geo or context based advertising which we know to be much less effective and, hence, far most costly.

Apple -- which has already delayed the rollout once, pushing it out until next year -- plans to make the change on its setting for iPhone users that require consumers to opt in to ads rather than opt out. The change is expected to impact advertisers’ ability to target ads.

The small business community on Facebook is asking others to speak up to let Apple know that this update is not okay.

When Monique Wilsondebriano, founder of Charleston Gourmet Burger Company, started the business with her husband, she didn’t have the budget to advertise. Personalized ads give small companies the ability to level the “playing field,” she said, to reach consumers. “There is no possible way that our company could have reached the level of success that it has today without personalized ads.”

Facebook in the ad asks small businesses to speak up and be heard. Tell Apple they will lose even more business if the company insists on implementing this change.

In the ad, Facebook writes: “Forty-four percent of small to medium businesses started or increased their usage of personalized ads on social media during the pandemic, according to a new Deloitte study. Without personalized ads, Facebook data shows that the average small business advertises standards to see a cut of over 60% in their sales for every dollar they spend.