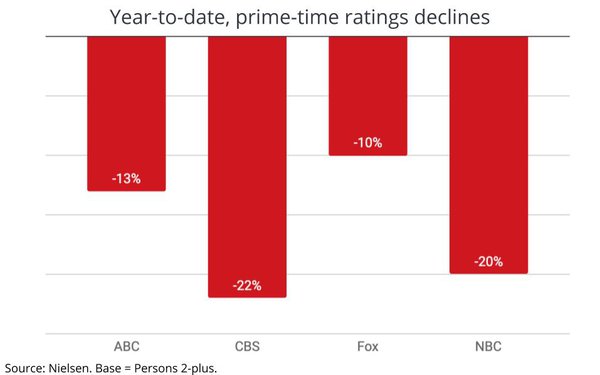 Steep prime-time ratings declines -- 20% to 30% for the TV season-to-date -- resulted from the delayed start of many TV productions, forcing viewership to sink dramatically.

That, in turn, is forcing TV networks to give make-good inventory back to advertisers more than usual to meet ratings guarantees made during the spring/summer upfront.

TV networks typically hold back a set amount of advertising inventory for sale in a given season to "make good" these ad deals. In rare instances, when ratings drop substantially, networks run out of inventory and have to return cash to marketers.

“[Networks] are challenged with inventory constraints -- partially due to limited original [programming] in the fourth quarter,” Gibbs Haljun, total investment lead of GroupM's Mindshare, told Television News Daily. “They are exploring all options to meet commitments.”

“It is a disaster,” says another veteran media agency executive. “We don’t want cash back -- we have nowhere to put it.”

Another agency executive was less concerned.

“I would not say they are running out or giving cash back at this point, but that remains to be seen in 2021 as this continues,” says the executive. “Streaming could be an alternative, but they just can’t make up for all the under-delivery.”

The executive says connected TV and OTT platforms are being used for make-goods in some cases, with approvals from media agencies and advertisers.

In addition, many agency executives are weary of replacing intended linear TV advertising with connected TV commercials, not believing they are getting the same media value.

Adding to this situation is a dramatically different upfront selling period for the 2020-2021 season, which was completed just before the fall season began.

This year, the market witnessed an eye-opening 15% decline to $18.6 billion versus the 2019-2020 upfront market of $21.9 billion, according to Media Dynamics. Much of this is due -- like fewer original fall program episodes -- to the pandemic.

The upfront TV ad buying market in spring/summer period is where major brand advertisers commit to buying an estimated 70% to 75% of networks prime time and other inventory throughout the upcoming TV season.