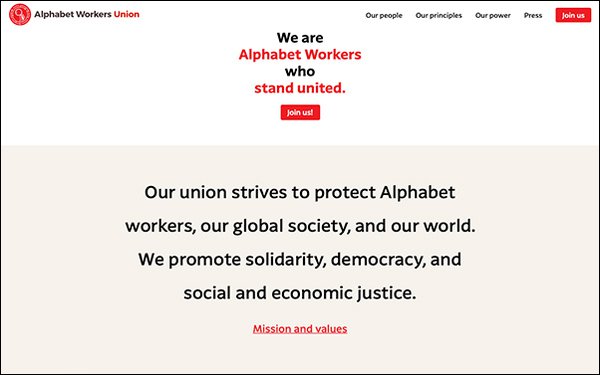 The new union, Alphabet Workers Union, will be open to all employees -- temporary or full time -- and contractors and vendors at Google. The goal is to “protect” Alphabet workers struggling with issues such as pay disparity, retaliation, and controversial government contracts.

“We believe that neutrality never helps the victim, and we prioritize the needs of the worst off,” according to the union’s website.

More than 225 Google employees formed the union, but sign-ups still have a way to go to reach majority.

Although Google's website has extensive information that explains many aspects of employees' decisions, there are more unanswered than answered questions.

The New York Times also calls attention to a few small unions that have had success in tech.

Workers at the crowdfunding site Kickstarter and at app development platform Glitch won union campaigns in 2020, and a small group of contractors at a Google office in Pittsburgh unionized in 2019. Employees at an Amazon warehouse in Alabama also are scheduled to vote on a union in the coming months.

Forming the Alphabet Workers Union is an accumulation of years of work by Google employees to seek fair and just working conditions and compensation. In 2019, Google employees held a sit-in at individual offices worldwide to protest what they called retaliation against employees who spoke out against the company and their managers.