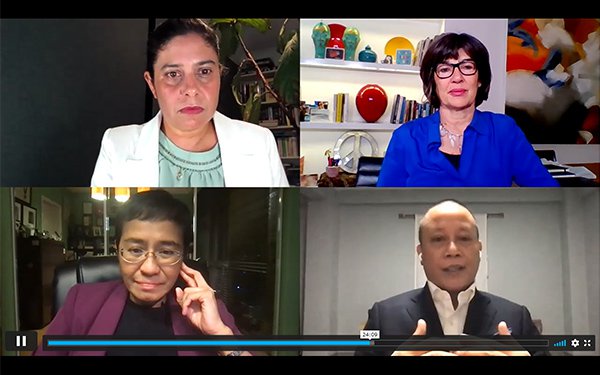 The opposition toward and stifling of journalism, which began four years ago when President Trump took office and has since accelerated, has set a new precedent for private companies to censor what is written and communicated across the internet -- and it will affect the way advertisers place ads in the future.

Some suggest that technology must fix the problem in order to stop the poison, so journalists have a fighting chance.

“I gave a massive warning” after President Trump’s election in 2016, said Christiane Amanpour, CNN's chief international anchor, during a virtual panel at the Reuters Next conference on Wednesday: “It’s very scary what he’s been saying and what might unfold over the next four years, because if the president of the United States, instead of exploiting the values of democracy and freedom of expression on the free and fair internet around the world, attacks his own journalists, that has a massive megaphone and [exponential] effect on journalists ... .”

Amanpour, who thinks journalists should have stopped reporting on Trump's tweets a long time ago, hopes the incoming administration will reset the global view from the most powerful democracy in the world, to do what a free press is designed to do -- hold governments and bad actors accountable.

“It's old power and new power,” said Maria Ressa, founder at media company Rappler. “The old power with President Trump leading it, and a collapse of the values, just empowered a lot of the authoritarian leaders who have come in through new power -- technology. That made journalists significantly more vulnerable.”

In less than two years, Ressa has had 10 criminal cases made against her, and has been arrested, without changing the way she operates compared to before. She says the world has significantly changed.

“I blame technology for not thinking far enough ahead, because if they were pharmaceutical companies they would be [facing] libel for what they have done in Myanmar, in the Philippines, and in the United States,” Ressa said. “I worry without a strong value-driven U.S. government, the values of democracy and freedom, it has the dictator’s playbook that began in social media and freely moved from the virtual to the real world.”

Leaders worldwide have been analyzing the events that have occurred in the United States during the past four years, as President Trump tweeted continually about whatever he was thinking and feeling.

The U.S. media calls this fake news, but prior to Trump taking office it could be considered propaganda because so many of his comments are based on belief and not substantial facts that the government is willing to share.

Ressa says this is fundamentally different than what censorship means when talking about “behavior modification” systems, with regard to mobile phones and platforms. It’s about emotions combined with “God-like technology.”

“We’re being insidiously manipulated by algorithms that aren’t transparent and fed messages [through] natural-language processing,” she says, adding that the platforms are the gatekeepers. “Their incentive is to make more money. And they make more money by making it more incendiary. Yes -- if they do it to President Trump they should hold to their standard.”

Sonny Swe, co-founder at media company Frontier Myanmar, said the Myanmar President Aung San Suu Kyi began using Facebook to distribute information about the country. The government is making all the announcements -- including information about COVID-19 -- in Facebook. For journalists and media companies, the problem is accessing where the data comes from.

“I thought we learned a lot of lessons from the U.S. scenario,” he said. “Facebook has already banned a lot of military accounts -- including the general, the head of the military, has already been taken down.”

Traditional news groups have yet to determine the amount of power they have lost.

Eventually, journalists did stop reporting on news they considered propaganda. For example, with the Hunter Biden laptop story, some believe the media hid one view of president-elect Joe Biden and family, and left U.S. citizens with their view, burying news about Hunter Biden and his relationship with China’s government. Others agree with these journalists that President Trump led the path to censorship among big tech companies such as Amazon, Google, and Facebook.

Search engines, social media sites, and cloud services run on telecommunications technology, which the Federal Trade Commission (FTC) governs, according to some.

“In my opinion the government needs to modify Section 230,” says Chris Carter, tech expert and CEO of Approyo, in a separate interview. “You cannot be a content provider and an editorial source. Firms need to make a decision with their business and stick with it.”

He pointed to Amazon Web Services shutting down Parler as a major concern for freedom of speech and democracy.

“We consider cloud computing just like we consider the electric company,” he said. “It’s there to support us, take care of us -- and, yes, they can shut you down if you don’t pay your bill, but unlike the electric company, AWS or other cloud computing companies feel that they can willy-nilly shut you down if you do not believe in their opinions .... so it makes me a little bit more nervous on that side of the technology framework.”