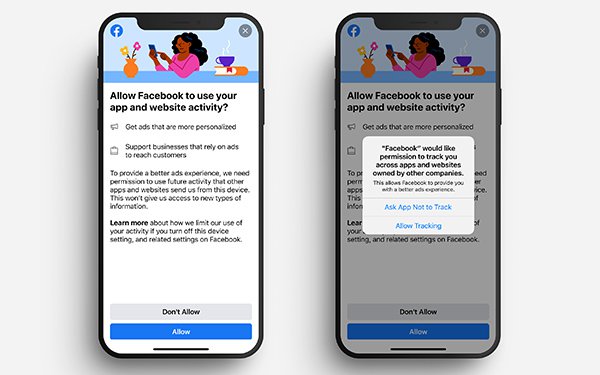 Facebook plans to encourage iPhone and iPad users to allow online tracking by telling them that tracking will result in “ads that are more personalized” and will also “support businesses that rely on ads to reach their customers.”

The company said Monday that it will show users a screen touting online tracking immediately before showing people Apple's upcoming privacy screen, which asks users to decide whether or not to allow tracking.

“We disagree with Apple’s approach, but will be showing their prompt to ensure stability for the businesses and people who use our services,” Facebook said Monday in a blog post. “To help people make a more informed decision, we’re also showing a screen of our own, along with Apple’s. It will provide more information about how we use personalized ads, which support small businesses and keep apps free.”

Facebook adds: “We feel that people deserve the additional context, and Apple has said that providing education is allowed.”

Facebook's new screen comes in response to Apple's decision to require developers to obtain iPhone and iPad users' consent before tracking them with the Identifier for Advertisers -- an alphanumeric string that enables tracking across apps.

Facebook, which stands to lose significant ad revenue as a result of Apple's plans, recently ran newspaper ads headlined “Apple vs. the free internet,” which claimed that Apple will “change the internet as we know it -- for the worse.”