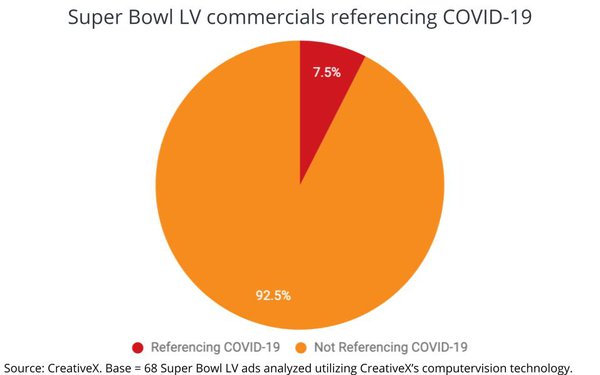 The biggest surprise among the 68 TV commercials airing in CBS' coverage of Super Bowl LV Sunday night was how few of them actually addressed the elephant in the room.

Only 7.5% of the spots actually even referenced the COVID-19 pandemic, according to a unique analysis of ads appearing in the Big Game by CreativeX, an analytics firm that utilizes proprietary computervision technology to organize and catalogue the types of creative featured in Super Bowl ads.

“We wanted to understand how the tumultuous events of the past year shaped the creative decisions that marketers were making when presenting their brands on the world’s largest stage,” CreativeX Founder-CEO Anastasia Leng said, adding: “However, we saw almost no impact from COVID, Black Lives Matter, or the U.S. elections on this year’s Super Bowl ads."

In fact, fewer than 5% of the Super Bowl LV ads showed people wearing face masks, while 51% depicted people gathering in groups or larger crowds, which is roughly the same percentage that were depicted that way in the ads appearing in Super Bowl's between 2016 and 2019 (see total findings of CreativeX's analysis below).

“We predicted that marketers would recontextualize social events in light of the pandemic but we were wrong,” said Leng.  “The avoidance of Covid likely came down to a decision to ‘stay out of politics’ due to the polarizing perception of how the pandemic should be handled.”
advertising, analytics, covid-19, messaging, research, super bowl, technology, television
Next story loading