Ad Execs Viewing Media More As A 'Quality' Than A Commodity 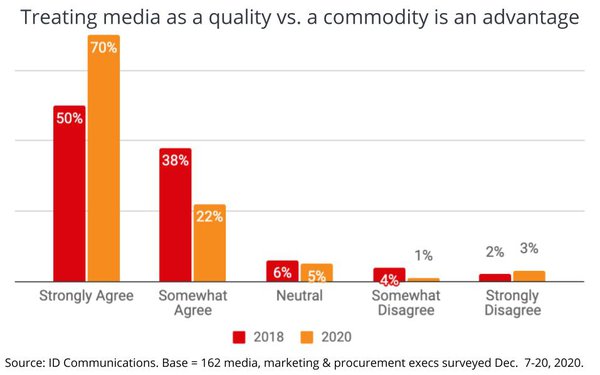 While a number of recent trends in media-buying -- including the ascendance of procurement and shifts to machine-based programmatic buying -- may have appeared to have shifted industry perceptions of the value of media as more of a commodity than a "quality," a new study from consultant ID Communications indicates it has actually moved in the other direction over the past couple of years.

Specifically, significantly more advertiser and agency executives now "strongly believe" those who view media as a quality have a competitive advantage over those who view it as a commodity.

Interestingly, the study -- which surveyed an international panel of media, marketing and procurement executives in December 2020 -- found that advertisers and agencies are in lockstep on that sentiment (see chart below).

While the report does not explain the recent shift, including whether it is a rebound from so-called "race-to-bottom" concerns about the commoditization of media, it does show there is a broad consensus that media may have as much of a strategic advantage as any other aspect of the marketing mix.

“Media can be as strategic as any form of advertising and has moved well beyond its legacy baggage as a commodity buy," said one anonymous advertiser quoted in the report.

“Given the size, complexity and share of marketing spend -- plus the potential revenue of media to the business -- anyone that does not regard it as a quality buy is not in the right position," said another. 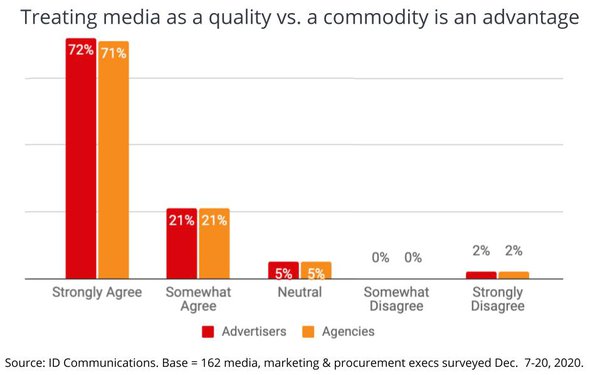