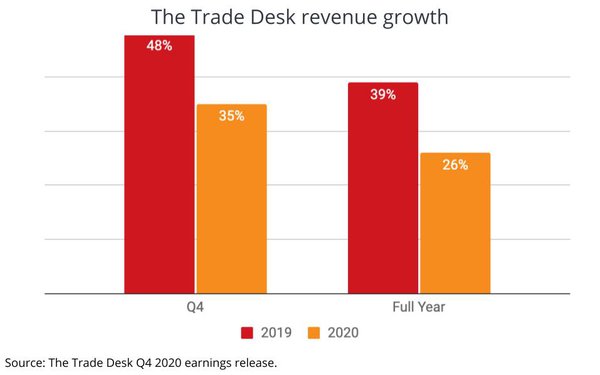 The Trade Desk continues to grow as Madison Avenue’s dominant programmatic trading platform, and the company’s earnings call this week reveals it continued to surge in both revenues and ad billings during 2020 despite being “significantly impacted” by the effects of the COVID-19 pandemic.

But as strong as 2020 was for the platform, its near future outlook appears even brighter based on several key factors highlighted during the call, especially its deal with Walmart to create a new programmatic retail advertising marketplace leveraging Walmart’s data and The Trade Desk’s technology.

“Walmart has stated that they view themselves as potentially becoming the fifth largest online advertising platform,” Pivotal Research Group analyst Michael Levine writes in a note summing up the earnings call, and noting that Walmart and The Trade Desk have their eyes on Amazon’s dominance of digital retail trade advertising, estimated at more than $20 billion annually.

While the deal isn’t likely to impact The Trade Desk until next year, The Trade Desk CEO Jeff Green estimated the total real trade advertising marketplace is worth at least $100 billion.

“We are both highly incentivized to help sell more Dove soap and more Tide detergent and more Hershey chocolate bars,” Green said, adding: “And if we do that, we both benefit. We both scale with the outcome. So in other words, we're both going to participate in the upside.”

The other major themes during the call were not disclosed in detail, but also offered future acceleration for The Trade Desk’s role in programmatic advertising, including its continuing focus on connected TV, and its development of an open source “unified ID” to help advertisers and agencies target users in a post-cookie/post-Apple-IDFA world.

Meanwhile, The Trade Desk said is revenues grew 48% in the fourth quarter and 29% for full-year 2020, despite a slowdown in ad demand attributed to the pandemic.