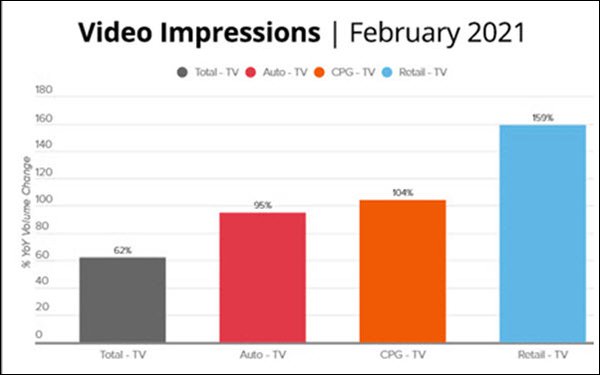 In a sign of retail optimism and innovation, retail video impressions increased 63% year-over-year in February, driven by a 212% jump in programmatic audience buying and a 159% increase in connected TV, according to data from the Innovid iQ dashboard.

Retail brands’ doubling down on CTV and programmatic shows that “the modernizing of the industry isn’t just taking place at the store level,” comments Stephanie Geno, Innovid senior vice president of marketing. “Retailers are embracing digital capabilities to reach their shoppers and building unified experiences across all touchpoints and channels.”

All verticals saw impressions increases. Beyond retail, the categories showing the largest YoY gains in the month were automotive (+57%), CPG (+55%) and telecom (+54%).

CTV impressions saw substantial increases in automotive (95%) and CPG (104%), as well as in retail, in February.

Telecom has prioritized omnichannel strategies, with strong impressions growth in TV (+129%) and mobile (+91%) in the past six months.