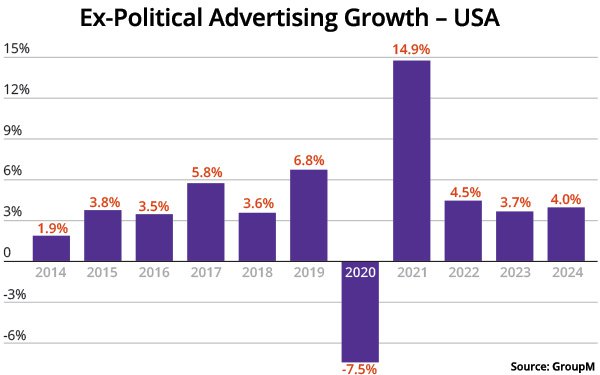 Total U.S. television advertising will recover this year from the impact of the COVID-19 pandemic a year ago -- up 9.3%, according to GroupM, sans political advertising. But 2022 will see a return to more modest or challenging results.

Brian Wieser, president of business intelligence, GroupM Global, estimates that total TV advertising will rise to $62.5 billion in 2021 -- up from $57.2 billion in 2020.

These estimates exclude any political advertising comparisons and include digital media extensions of traditional TV platforms.

Next year should see a return to more weak and/or modest advertising gains, with national TV inching up 2% to $43.5 billion and local TV down 9%, resulting in total TV advertising spend slipping 2% to $61.5 billion for 2022.

However, he also notes that promising major growth in connected TV and streaming platforms “will not likely be a driver of that growth any time soon, given the limited opportunities for marketers in those environments.”

Local TV will continue to benefit from its every-other-year spikes from political advertising. Estimates are that 2020 brought in $4.1 billion to local TV stations, according to AdImpact.