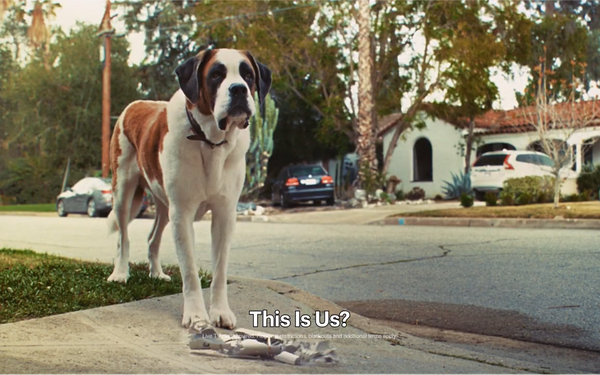 With too many premium streamer apps to choose from, new on-air marketing from Hulu answers the call with a campaign under an initial theme “Start with Hulu.”

TV creative called “Shattered” begins with a couple sitting on a couch just starting their TV entertainment evening. Clicking around with the remote, the man complains: ”Why does it take forever to find something to watch?” The woman says: “Just start with Hulu.”

She then adds that in addition to the man’s desire to watch live sports, there are original programs, exclusive series and live channels on Hulu.

From there, it goes through a fantasy montage of video segments with all kinds of people asking the same question: “Everything I love is on Hulu?”

Surprisingly, characters realize their favorite shows are on the streaming platform, including “Killing Eve,” “Family Guy,” breaking news, “SportsCenter,” “Nomadland” and “This is Us.” (A dog seems to want the latter.)

They are so shocked that whatever they are holding -- fish, plant, coffee mug, tennis racket, pizza and a pocket book (from Kris Jenner) -- drops. Upon hitting the ground, everything crumbles to pieces, accompanied by an ominous sound. Hulu calls these “earth-shattering moments.”

A voiceover follows: “Time to have everything you love. Time to have Hulu.” The creative was developed in partnership with London-based creative agency DixonBaxi.

Hulu says the campaign will run through the fall, starting with brand marketing this month, including social media, out-of-home, and TV ad executions.

This will be followed by another marketing effort in the summer, in conjunction with new original Hulu content to be launched. The final piece of the campaign will come just before the start of the new TV season in the fall.