Golden Globes Ratings Drop Could Be In Store For Oscars Too 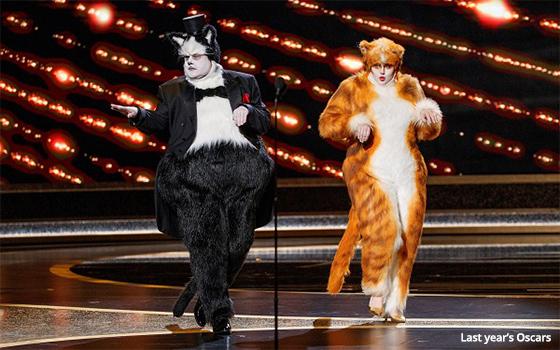 If the Golden Globes are a harbinger of how the Oscars will play out -- as many movie-industry observers often say -- then there could be bad news in the offing for this Sunday's Oscars telecast on ABC.

Those observers are usually referring to the awards themselves, and how the winners of Golden Globes can sometimes be used to predict who or what will win Oscars a few weeks (or in this case, months) later.

In this TV Blog, the issue is ratings, not Best Actors or Best Pictures. And if the Golden Globes are a predictor of Oscar results, then ABC and its Motion Picture Academy partners should brace themselves for a precipitous decline in viewership this year.

That's what happened with this year's Golden Globes, co-hosted by Tina Fey and Amy Poehler on February 28 on NBC. Basically, year-to-year viewership fell off a cliff.

The three-hour telecast drew a paltry audience of just 6.91 million. A year earlier, the show had 18.32 million viewers. For those who love percentages, that's a 62% decline.

What happened? Well, one explanation that is not unreasonable is that the year-long COVID-19 pandemic impacted the movie and TV businesses in such a way that public interest in -- or more importantly, engagement with -- the most-nominated movies and TV shows was at an all-time low.

People did watch a lot of TV in the past year, and in the process many people watched at least some of the past year's Oscar-nominated movies at home on small screens too.

However, one interpretation of the woeful Golden Globes numbers is that all that viewing did not translate into passion for -- or even interest in -- who won or lost when it came time to honor various movies and TV shows with awards.

Moreover, unlike the Golden Globes, the Oscars concerns itself only with motion pictures, and not television. And in the past year, the centerpiece of the movie-watching experience -- namely, going to movie theaters to see them -- disappeared almost completely.

It was as if “the movies” -- as a long-time and reasonably stable means of entertaining ourselves outside the home -- suddenly died and was then replaced almost completely by at-home viewing on TVs and other devices.

It should go without saying, but these media are small in comparison to movie theaters and their big screens. Now, as noted in another TV Blog earlier this month, “movies” are now synonymous with “TV.”

This is the environment in which ABC and the august Academy of Motion Picture Arts and Sciences plan to put on an Oscar show this Sunday night: Theater-going is at a virtual standstill, the nominated movies are not at all widely known, and judging by the Golden Globes numbers, apathy is the best way to describe how the former moviegoing public feels about this year's nominees.

In addition, this year's Oscars will have no host and will likely be a combination of on-site segments inside the Dolby Theatre in Los Angeles and myriad remote locations where the stars will present and accept their awards from their homes and vacation houses.

But the Oscar ratings have been experiencing declines of their own.

Last year's Oscars on February 9, 2020 -- before the COVID lockdowns (and featuring James Corden and Rebel Wilson cavorting in their costumes from “Cats” -- photo above) fell to an all-time low of 23.6 million viewers, a 20% decrease from 29.6 million in 2019.

If my arithmetic is correct (which is not always a sure thing), for the Oscars this weekend to experience the same 62% year-to-year dropoff in audience as the Golden Globes did in February, then this Sunday's Oscars will have to draw only around 8.97 million viewers.

Such a result would be stunning, unprecedented, and in light of what happened with the Golden Globes, entirely possible.