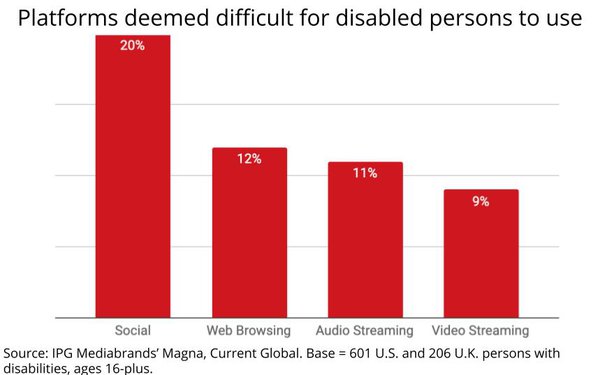 Social media is the most difficult medium overall for persons with disabilities -- including visual, hearing, speech and cognitive ones -- to use. That's the finding of a study conducted by IPG Mediabrands Magna, and is part of a report produced with sister unit IPG Media Lab.

The study, which surveyed hundreds of persons with disabilities in the U.S. and U.K., found that social media ranked as the most difficult option to use for all four disability groupings but especially for those with speaking disabilities -- as did other options measured in the survey, including web browsers, audio streaming and video streaming services.

“It’s astounding how much work still needs to be done to make communications accessible to people with disabilities,” Magna Senior Vice President-Intelligence Solutions Kara Manatt stated in a release of the report this morning. “This audience is consuming a lot of content, so brands need to ensure they put in the work to make communications more accessible. Assistive tools are only part of the solution – if communications aren’t accessible, the tools can’t really be effective.”

The report estimates people with disabilities represent 15% of the global population, implying that the lack of accessibility to some media may be a material issue for advertisers, though the report does not explicitly measure the impact on advertising in those media.

The report, "Digital Accessibility: The Necessity Of Inclusion," comes as many advertisers, agencies and media are striving to be more inclusive of various underrepresented segments of the population, and may be the first of its kind to explicitly measure the implications for various media platforms and formats. 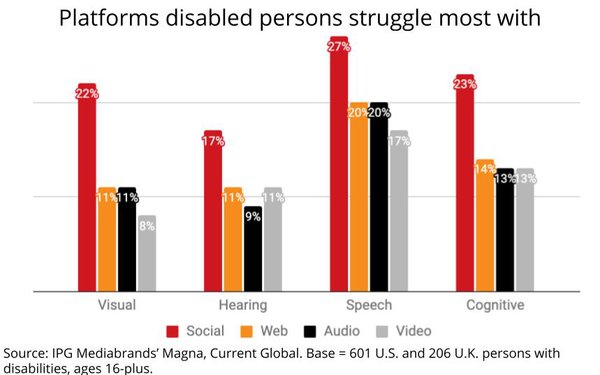