1 In 5 Fake Ecommerce Listings Come From 3% Of Sellers 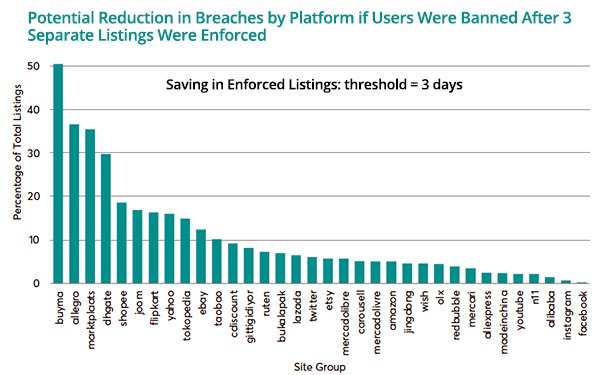 Ecommerce became one of the fastest-growing segments for retail in North America and Europe in 2020, driven by the COVID-19 pandemic and the need for goods and services, many unattainable in brick-and-mortar stores.

As ecommerce continues to grow, it is estimated that the global, economic value of counterfeiting and piracy could reach $4.2 trillion by 2022, placing 5.4 million legitimate jobs at risk during the same period, according to a study released by Incopro.

"While we regularly hear from brands that repeat offenders are a challenge, we were surprised by the scale of issues that are driven by a small proportion of offenders, with only 3% of the most egregious offenders responsible for over 20% of issues," said Piers Barclay, chief strategy officer at Incopro.

Data released this week by online brand protection software provider Incopro, fielded between November 2019 and 2020, found that a core group of repeat sellers are responsible for a disproportionate share of illicit activity across thirty-four online marketplaces and social sites.

The study — Three Strikes and Out: How e-commerce platforms can protect consumers from repeat offenders — analyzed more than 1.5 million IP infringement notices, sent on behalf of 750 brands during a one-year period.

The study reveals that five fake marketplace and social site ecommerce listings flagged to online platforms were posted by 3% of the most aggressive repeat infringing sellers. The removal of those sellers could prevent $78 billion in annual losses for brands and consumers.

Counterfeit products found online is not something new, but the situation is getting worse, although companies are creating task forces to monitor goods sold across their sites.

In 2019,The Wall Street Journal published an article stating that an investigation found 4,152 items for sale on Amazon's site that have been declared unsafe by federal agencies are deceptively labeled or are banned by federal regulators — items that big-box retailers' policies would bar from their shelves. Among those items, at least 2,000 listings for toys and medications lacked warnings about health risks to children.

Amazon announced a Counterfeit Crimes Unit in 2020 dedicated to find and prosecute counterfeiters who violate the law. The team consists of former federal prosecutors, experienced investigators, and data analysts.

The goal is to drive counterfeit product sales and listings down, to zero. The marketplace in 2019 invested more than $500 million and had more than 8,000 employees fighting fraud, including counterfeit.

It's not that ecommerce and social sites have turned a blind eye, but they might not do enough to enforce their own policies.

Incopro is calling on the industry to enforce its own counterfeit policies.

Incopro's analysis believes that implementing a three-strike policy, among others, could reduce the potential risk to consumers by up to 24% as use of ecommerce grows.

Effective policy in this area would protect consumers, rights holders, and trust in the platforms themselves.